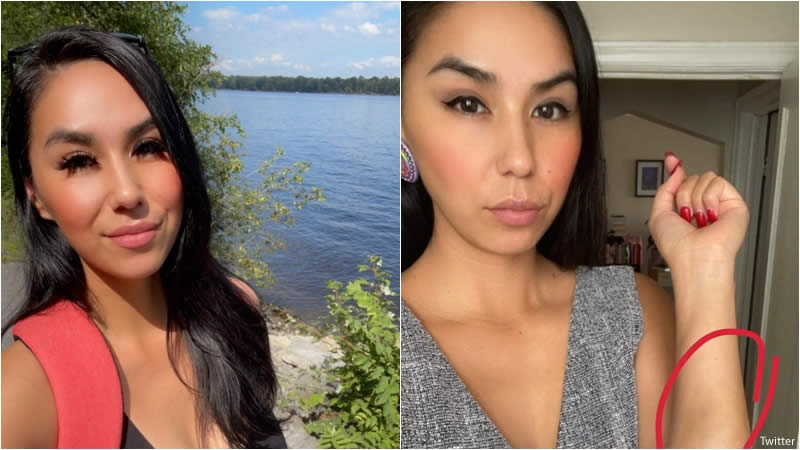 A horrifying video of an Indigenous woman being attacked by a horde of white people for not wearing a bra has gone viral on Twitter. The victim, Laura Gagnon, shared and captured the video, which shows the mob accosting her and one suspect who the police have yet to publicly identify, striking her.

“Yesterday evening I was attacked by a white woman who was upset I was wearing no bra,” Gagnon shared in a tweet alongside a video of the incident. “I utilized IG live to record her actions against me. I have never experienced a white mob chasing me and it’s the scariest thing that’s ever happened to me in my life. Please be safe out there.”

According to the video, the incident started with a verbal altercation between Gagnon and another woman last Wednesday. According to the Ottawa Citizen, two women approach Gagnon as she questions why she, as an Indigenous woman, would be body-shamed on unceded Algonquin territory.

“Don’t touch me b***h,” she shouts as one of the women appears to physically assault her.

As per Yahoo News, when the mobsters realize Gagnon is filming, things heat up. One woman can be heard screaming, “Stop filming,” and then she appears to hit Gagnon again, knocking her to the ground as more screaming ensues.

Gagnon struggles to get up and retrieve her belongings, including her phone, which the mobsters had snatched. The video cuts to Gagnon in her car, explaining what happened.

“Guys, I’m being attacked right now,” she says, breathless. “And none of these people…” her voice trails off as the mobsters bang and knock on her doors. The woman who allegedly hit her is shown climbing on the hood of her car.

“This lady is attacking me right now,” Gagnon says in the video. She later says that she believes the woman attacked her because she wasn’t wearing a bra.

According to the Ottawa Citizen, police were called to the Billings Bridge area in Ottawa, Canada, after reports of a “collision,” where the incident occurred. Investigators determined Gagnon had been assaulted, charged the suspects, and took them into custody. They were later released after being served with a notice to appear in court.

Authorities are describing the incident as a “verbal altercation that escalated into a physical altercation.”

The unnamed 37-year-old suspect is said to be charged with assault and mischief in court.

The case has also been reviewed by the Ottawa Police Service’s Hate and Bias Crime Unit, though no hate-crime charges have been filed.