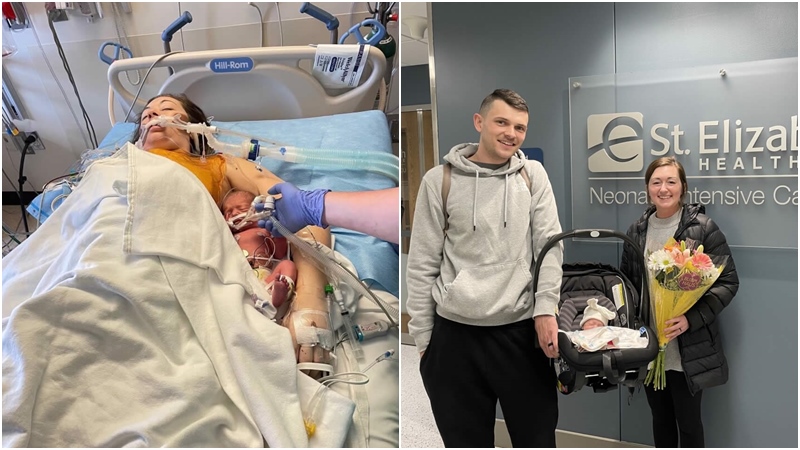 Parents-to-be were excited at the prospect of becoming parents in a few weeks, but everything changed in a matter of hours in March when the pregnant woman developed heart failure and was rushed to the hospital to have her baby delivered since she was on the verge of death.

The pair, who are now parents to a healthy infant, overcame a life-threatening situation and wanted to share their experience with the public, describing how delivering the baby helped the mother stay alive despite her heart-stopping beating at one point during birth, according to The Charleston Press.

Veronica Williams was 32 weeks pregnant on March 9 when she suddenly felt sick and was brought to a local hospital, according to WCPO, which broke the story late last month. According to her claims, Veronica had shortness of breath and a high heart rate, and doctors discovered that she had heart inflammation as soon as she was admitted to the hospital. The issue was a type of myocarditis.

Veronica’s condition was grave, so doctors at the hospital in Columbus, Ohio, conducted an emergency C-section in the hopes of preserving her life. Even they weren’t convinced that delivering the baby prematurely would save her, so they asked Veronica’s husband, Sean, if they should “save the baby or the mother first’.

And that prompted him to ask another unthinkable question: “Can I do this on my myself?” His answer was no, therefore he instructed doctors and nurses to make decisions first and foremost with his wife, Veronica, in mind.
Veronica’s entire heart muscle was completely weak due to the inflammation, according to the doctors. Her situation was so grave that her heart stopped totally as she was giving birth.

“This is one of those times that the hospital stood up, and took the opportunity to do what was best for mom and baby,” said Lindsay Calderon, cardiac surgery recovery nurse manager. “And that meant stepping out of our comfort zone. That meant doing things we’d never done.” In this case, they brought baby Brooklynn from the neonatal intensive care unit she had to go to because her young lungs needed help from her mother who was with the heart team.

Doctors decided to bring the newborn and place the baby in Veronica’s hands because they weren’t sure if Veronica would make it or not. Doctors felt that might be the only chance the mother had to hold the child at the moment because Veronica’s health was so severe. “I don’t remember it, but they did do that,” Veronica said to the station.

Just as doctors put the baby in her hand, Veronica’s condition and vital signs immediately improved. “And I don’t think there was a dry eye in the station,” one of the doctors said. “And getting to actually watch it, and be a part of it … was an amazing feeling.” “It’s amazing. Not something you could script, that’s for sure,” another added.

After giving birth, Veronica had to undergo repeated open-heart surgery, and doctors estimated she had a 50% chance of survival. Veronica, on the other hand, fought bravely and received hospital care for several weeks. Both the mother and the baby felt well enough to be sent home last month. Veronica will continue her therapy at home, where she and her husband Sean have finally reunited.

“There’s still a lot to figure out and only time will tell what the best course of action will be but she feels more like herself being home,” Sean wrote on their GoFundMe page. “Celebrating Mother’s Day with Veronica and Brooklynn outside the confines of a hospital is something we will never take for granted. Thank you to everyone who was involved in their care, to God who makes all things possible, and to an amazing support system!”

The First Surrogacy Meetings – What Should You Ask Your Intended Parents?