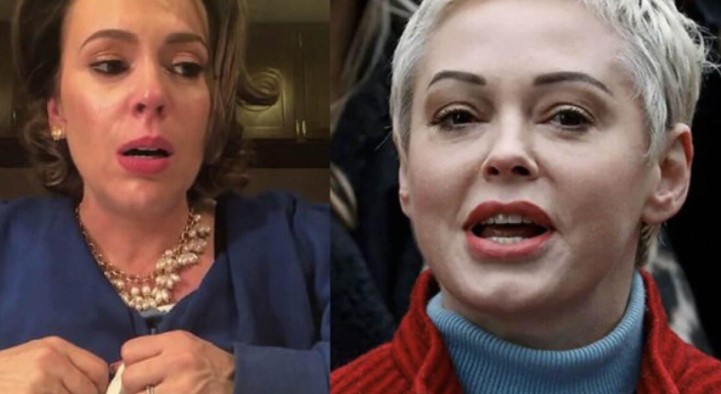 McGowan, who has been on a tirade lately, calling out the failed and perverted Dems, turned her rage against her former co-star Milano in a pair of scathing tweets.

Rose is furious and calling out the Dems hypocrisy over supposedly “caring” about women. She’s specifically angry at people like Alyssa, who co-opted the #MeToo movement for her own “branding” and then killed it by being a massive hypocrite.

Remember how Alyssa fought to keep Justice Brett Kavanaugh off the SCOTUS over sketchy sexual harassment allegations that nobody could prove, but is backing Joe Biden, even though a former staffer with credible witnesses says he raped her?

Yeah, Alyssa, among many other Dems, turned the #MeToo movement into one big hilarious joke.

So, it’s understandable that Rose McGowan has had enough.

She took to Twitter where she roasted her former co-star for how she “stole” and destroyed the #MeToo movement, but then she took it a step further and shared what a toxic “DIVA” Alyssa was on the set of “Charmed.”

From what Rose says, sounds like we have another “Ellen” on our hands – maybe even worse.

In the first tweet McGowan says: “1) You stole #metoo (a brilliant communication tool, not a movement) from Tarana. You co-opted my movement, the Cultural Reset, for fame, jealous of me for outing my rapist. You made 250k per week on Charmed. (Con’t)”

And then in the next tweet she says: 2) “You threw a fit in front of the crew, yelling, ‘They don’t pay me enough to do this shit!’ Appalling behavior on the daily. I cried every time we got renewed because you made that set toxic AF. Now, get off my coattails you fucking fraud.”

Alyssa Milano likes to come off as this wholesome, loving progressive, doesn’t she?

She’s always worried about women, and the planet, and don’t forget to “wear your mask,” etc. etc.

But in reality, Alyssa appears to be just like every other liberal out there – a total phony who uses fake concern and activism to cover up a dark rotting soul.

Ouch: If You Thought CNN Was Collapsing, Wait Until You See What’s Happened to Hollywood