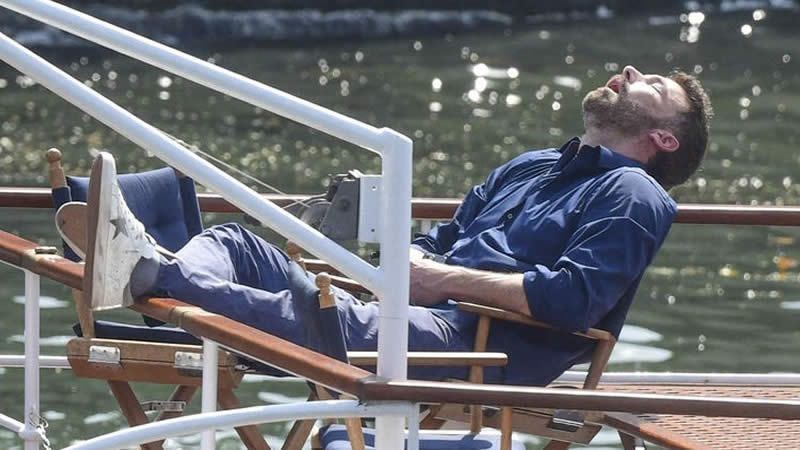 The newlyweds and their children are vacationing in Paris.

Naturally, their arrival in Paris on Thursday night has received a lot of media coverage and paparazzi interest as they have explored the city while on a romantic summer vacation with their kids.

But the memes naturally follow Ben wherever he goes.

And so, throughout the couple’s two-hour private tour of the Seine, the Oscar winner has been seen in a number of poses, including with his eyes wide shut and mouth agape, as he appeared to take a nap. This has delighted everyone on the internet.

The actor can be seen dozing off with his feet propped up on the boat’s railing in photographs that were likely taken from the beach. According to People, the boat is a 71-foot teak “gentleman’s yacht” from the 1950s.

Other pictures from the outing with J-Lo show a very alert Ben, along with her twins Emme and Max, who are 14 years old, and his daughters with his ex-wife Jennifer Garner: Violet, 16, and Seraphina, 13.

According to People, who cited an unnamed source, the newlyweds were also seen cuddling for more than two hours on a park bench. The insider said they appeared “like two teens” and were “very loving, very attentive.”

The honeymoon immediately after the wedding took place on the same day as Jennifer’s 53rd birthday. Ben looked to become upset in photos obtained by TMZ as the pair dined next to the Eiffel Tower to make the occasion.

In a touching moment, the actor appeared to be comforted by Jennifer as she drew him close to her face.

As per Huffingtonpost, the meal ended with the Marry Me star reportedly releasing a turquoise balloon that they brought to the seafood restaurant and had attached to their table, for some reason.

Ben took pictures to capture the moment, and we can only assume that they will appear on his not-so-secret Instagram account.

The couple, who started dating in the early 2000s and later rekindled their romance, has much to celebrate after tying the knot nearly 20 years after calling off their original engagement.

According to reports, the newlyweds are preparing a second ceremony for friends and family that will take place in the upcoming weeks at Ben’s estate in Georgia, which was where they planned to wed the first time around.

“Jen and Ben are still planning to have a larger celebration soon with family and friends to celebrate their love in a bigger way,” an unnamed source told Entertainment Tonight.

“The newly married couple has kept their celebrating to a minimum as they plan to have a bigger gathering within the next few weeks,” the source added.

“Both have been married before and wanted to keep the marriage quiet and low-key before they plan to have a big celebration in Georgia.”

Zayn Malik unhappy about sister marrying a ‘thug’ who just got out of prison?