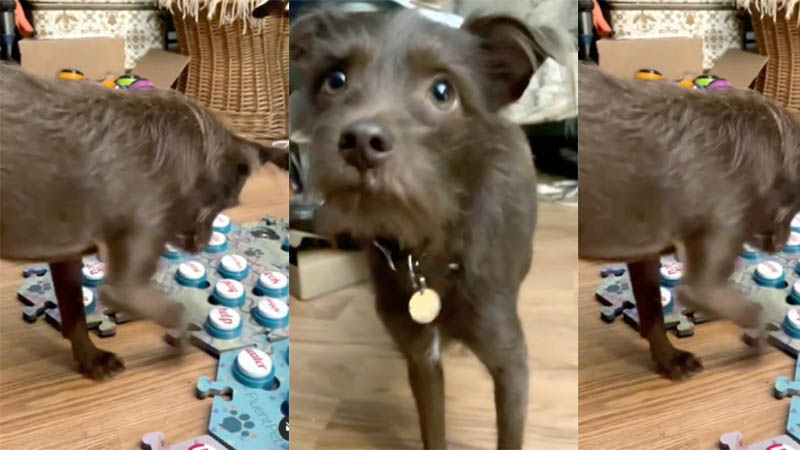 Many dogs are talkative and will both bark and howl, but some dogs know how to speak the English language, so to speak. Bastian is one of those dogs who was rescued from the streets and talks to his owner every single day. Joelle Andres says her dog knows 51 words and speaks them to her all the time. He doesn’t pretend to say them, he simply heads over to his soundboard and “speaks.”

“We were all in lockdown in quarantine and we had learned about Christina Hunger, who is a speech pathologist, who started doing canine AAC, which stands for ‘Augmentative and alternative communication’ with her dog Stella and once we found out, like a lot of other dog and pet owners, we decided to try it with our own dog,” Joelle said.

The board has big buttons on it and when pressed it says things aloud like walk, outside, hike, and more. Since Joelle has a background in special education, she was drawn to the soundboard to teach her dog to speak. The words are pre-recorded and the buttons are made by the company FluentPet. As a result, Bastian can form words into doggie sentences and tell his owner what he wants.

The FluentPet board includes words like all done, later, breakfast, walk, fridge, and more. Whenever Bastian wants his mom to know something or do something, he simply moseys on over to the boards and lets his paws doing the talking. Press play on the video below to see this smart doggo in action.

A post shared by Bastian the Talking Terrier 🐶 (@bastianandbrews)

Coyote Waits In Bushes To Ambush Dog, Grabs The Dog And Drags Him Into The Woods