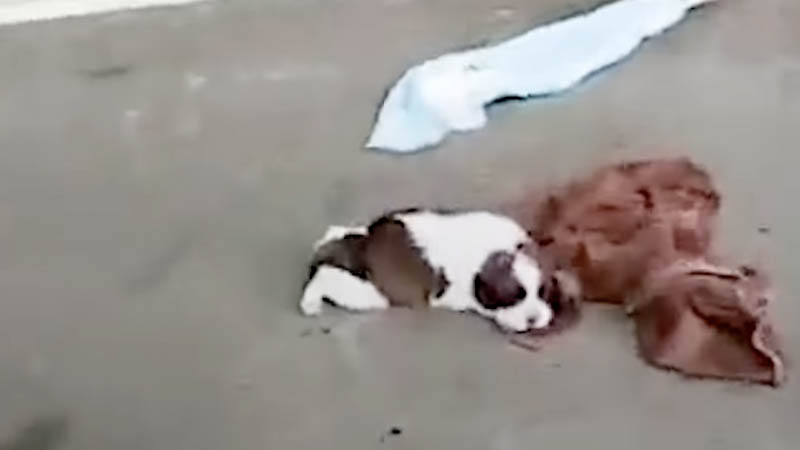 A tiny helpless puppy was seen lying on a porch. He was in such distress that he wasn’t moving. A rescuer luckily was called in and when she approached the little pup, she could tell he was critically injured. The porch belonged to an abandoned house. Where did the little guy come from?

The rescuer searched for his mother just in case she needed help too. But his mama was nowhere to be found. She named the little pup Bernard and put him into her car. She kept talking to him and told him over and over it would be okay. He was unresponsive but finally, after a few minutes, he let out a little cry.

Bernard was taken straight to the vet clinic. He had a wound on his back that needed to be treated. Once he was out of the woods, the rescuer could look for a foster home. He stayed at the clinic until he was cleared. The rescuer made some phone calls and found Bernard a foster mom that was willing to take in such a young puppy. He needed to be bottle-fed and Dina was happy to do it.

The tiny pup took to sucking on a pacifier for comfort. Dina gave him a rainbow teddy bear as well hoping it would keep him company. Bernard bonded to the bear right away. As Bernard continued to heal and get bigger, Dina grew confident that he could go on to his forever home. She would miss him but she had to make room for new fosters and Bernard needed to start his new life.

To see what happens next, check out the adorable video below by The Dodo. We are so happy Bernard was found in time! Thank you, rescuers!

No One Stepped-Up To Foster Dog That Bit Everyone, Rescue Made 1 More Call

Your Dog Can Tell Whether You’re Happy or Sad