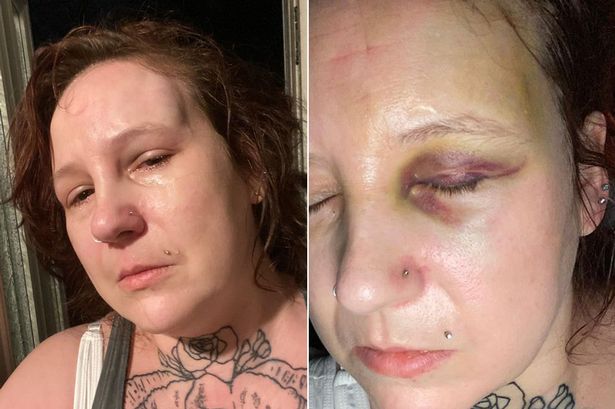 A mum was beaten up in her hallway after opening the door to a Boxing Day party-goer.

Lianne Bone, 37, claims she and her husband Peter were left battered and bruised by a reveller who stormed their house having been booted out of an illegal gathering by police.

Humberside cops were called to break up a festive gathering which she says ended up violently spilling into their home.

Lianne claims: “I heard tapping on my window and a man was stood there looking back through the window at me.

“I didn’t want to creep my daughter out so I closed the blinds and curtains again and sat back down.

“It was then I heard my front door open so I undid the deadbolt and bent down to pick up my dog and as I bent down the man punched me square in the forehead.”

Lianne then claims to have been punched in the face several times in the hallway of her home, before the man walked out into her garden and she followed him.

“I got knocked out, was going in and out of consciousness”, she claims. “I was screaming.”

Eventually, she says the people dispersed and police were called. She was taken to hospital but discharged the following day.

Already suffering with PTSD and anxiety, the traumatic event has left her fearing for her life in her own home.

“I‘m desperate for justice to be served. I’m not eating, I’m not sleeping, I’m anxious all the time. The other day I felt suicidal”, she said.

“I’m scared – I haven’t left my house since. My life has completely stopped because of them, I feel a shell of my former self.”

A spokeswoman for Humberside Police said: “We were called to reports of an altercation in Brompton Close, Hull, at shortly after midnight on the morning of Sunday, 27 December.

“A man and a woman were arrested in connection with the incident and a full and thorough investigation has been carried out.

“At this point, we have not been able to substantiate the claims made by either party involved in the incident and both have been released without charge.

“However, the case will be reviewed should any new evidence come to light.

“If you have information you believe could assist the investigation, please call our non-emergency 101 line, quoting incident number 16/129280/20.”