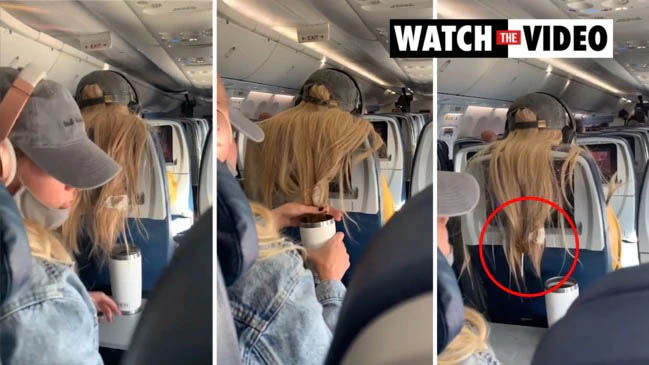 A furious plane passenger was filmed sticking chewing gum and a lollipop into a woman’s hair after she apparently blocked the view of the on-board TV. A video of the petty fight was posted to TikTok, causing debate over who was in the wrong – although there is doubt as to whether it is actually real.

One woman appeared to block the view of the passenger’s TV in the seat behind her by covering it with her long blonde hair. So the woman behind her starts putting chewing gum into the other passenger’s hair, matting it together.

She then takes out nail clippers and snips pieces off before dunking the ends of the hair in a cup of coffee, and sticks a lollipop to it. A flight attendant wearing a black face mask walks past, and seems to clock what is going on – but doesn’t react.

The woman repeatedly flicks her hair back over the seat, apparently unaware of the damage done, only for the passenger to flick it back again. She then gets up to go to the toilet, apparently still without noticing.

The footage was posted to TikTok on Friday but it is not known where the incident took place. Many seemed to side with the actions of the angry passenger.

One TikTok user called Hayden wrote: ‘At first I was with the lady in the front but after she kept throwing her hair back I feel like she got what she deserved.’ But many were quick to doubt the clip’s authenticity. One user pointed out the two passengers had the same hats on, suggesting they could be friends.

One woman named Julieanne wrote: ‘You would absolutely know someone is touching your hair.’ Others believed it was a wig the passenger was wearing, and claimed the whole thing was ‘staged’. One person wrote: ‘Come on that’s a wig! Totally staged! You think after she flipped it she didn’t feel all that stuff in her hair!’

7 Ways to Keep Your Lips Smooth In Winter