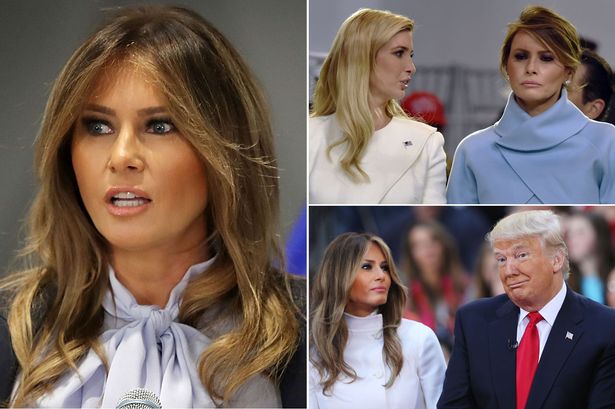 Away from the White House, aides reassured the First Lady that she would have more freedom in the future, once her husband was no longer President.

In her final days, Melania reportedly spent her time finding a new school for Barron in Florida and working on her farewell speech which was released on Monday.

Ahead of a President’s exit from the White House, there are several traditions that normally take place- including thanking staff who have worked tirelessly over the last four years.

Many of the staff have worked for numerous presidents over the years – and the handwritten notes at the end of each President’s term are typically  “cherished keepsakes.”

But not this time – as sources told CNN that the First Lady didn’t write her own notes – and instead tasked a staffer to write them “in her voice” before she signed them.

Shortly before the exit, Donald Trump and Melania found themselves the focus of intense criticism following the deadly riot at the Capitol on January 6, which resulted in five deaths and Trump’s impeachment.

But the Washington Post reports that sources close to Melania say she was “aware” of the criticism but appears “unfazed.”

One person in touch with the First Lady told the paper: “Melania is good.”

Following his election loss, President Trump raged about election fraud and launched a campaign to “stop the steal.”

Ahead of the election, Melania flew to several key states, including Wisconsin, where she dubbed her husband’s first impeachment “a sham.”

But she accepted that Biden had won, while Trump repeatedly disputed the election results for the next two months.

Kellyanne Conway, at one point one of Trump’s closest advisers, said Melania urged her husband to end his campaign alleging voter fraud, and she didn’t support the rally that ended in riots.

She told the Washington Post:  “She was against the protracted challenge to the election results, especially after the results were certified.

“I know she was against the [Jan. 6] rally and saying things to him.

“I think she thought it was futile and possibly chaotic. She was the only family member who was not there.”

When a mob first breached the Capitol, Melania was reportedly busy with record-keeping and not close to a television.

But when she saw the violent scenes, she urged her husband to intervene and end the riot.

Notably, Donald Trump announced on January 8 that he would not attend Joe Biden’s swearing-in ceremony, unlike every outgoing president for the past 152 years.

But it has been reported that Melania would have been happy to attend the ceremony, unlike her husband who has raged about electoral fraud following his election loss.

And although Melania did not invite Jill Biden for a traditional tour of the family area, she did work alongside White House Chief Usher Timothy Harleth to arrange the Biden’s move to their new home.

Now she is planning her future – which is likely to attract a huge amount of scrutiny.

Friends have reportedly said that the First Lady plans to duck out of the spotlight for a while – after four long years since her husband’s surprise victory in 2016.

But she plans to focus her energy on her “Be Best” campaign which promotes children’s well-being, and awareness of drugs and cyberbullying.

It comes as she was told she will have fewer restrictions once she is no longer in the White House.

But there may be more fractious times ahead – as the sour relationship between her and Ivanka potentially deepens.

Sources have claimed of ongoing arguments and disagreements between First Lady Melania, 50 and stepdaughter Ivanka, 39.

Although they both have strong relationships with Donald respectively, the two are said tonot get on, with Melania reportedly dubbing Ivanka a “snake.”

After the farewell ceremony, Donald Trump and Melania are set to move to Florida.

Melania is expected to be involved in the building and design of a Trump presidential library, which may be located in the Sunshine State.

But Ivanka has also expressed interest in the library – and bought a new home in Florida. The pair reportedly clashed from the beginning of Trump’s presidency, when Ivanka reportedly wanted the “First Lady’s Office” to be renamed “First Family’s Office”.

And the pair allegedly wanted to both decorate the Oval Office – before the president quashed the plans.

One source told the Washington Post:  “The library location has not even been scouted yet, but Ivanka has made her interest clear.

“As usual, Melania will have to contend with the other family members.”