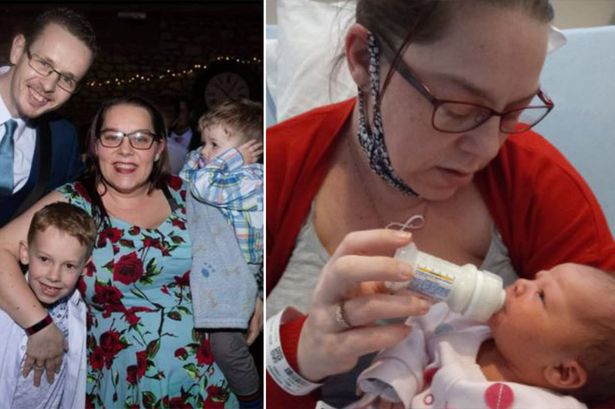 A mum has welcomed her newborn into the world, only 10 days after discovering she was actually pregnant.

Sam Hicks was rushed to hospital on January 11, where she gave birth to daughter Julia.

She and her husband Joe only found out they were expecting on January 2, after Sam, 40, did a pregnancy test.

The care home worker had done numerous pregnancy tests throughout the year, but they all came back negative, writes BristolLive.

“There were some signs,” explained dad Joe.

“But as Sam had done numerous pregnancy tests all which came back negative, she just put it down to stomach problems.”

But Joe, 32, felt a kick in his wife’s stomach while they were sat relaxing on New Year’s Day and Sam decided to get another test a go.

The following day she bought and completed the test, which said she was ‘three weeks plus’ pregnant.

The pair were shocked, and already have Thomas, three, and Johnny, eight.

They quickly began making preparations like booking scans and appointments with the midwife.

But baby Julia had other ideas and arrived before any of the appointments were held.

Julia weight in at 7lb and 8 oz and was full term.

Sam and her baby daughter remained in Southmead Hospital due to Julia having breathing difficulties.

But she is making good progress and dad Joe hopes to have the pair back home soon.

Amazingly, the pregnancy was never picked up when she was admitted to hospital in November with coronavirus.

“Obviously she was asked if she was pregnant when she was admitted and she said no, so that was that.”

Sam was admitted to the hospital and discharged four days later.

After two weeks at home she returned to work and the family enjoyed Christmas as normal.

The mum went to work on January 10 and after Joe returned from work as a lorry driver at 11.30pm, Sam began having contractions.

Julia was born at 3.14am the following morning.