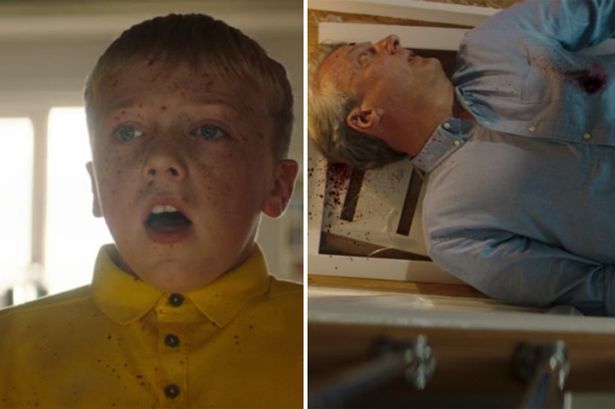 The Bays fans were left racing for social media on Wednesday night after Series two of the hit series kicked off.

In scenes minutes into the show, a man was murdered on his doorstep in a cold blood killing.

To make matters worse, his young son witnessed the whole thing and ended up covered in his father’s blood.

Posing as a postman, the mystery killer asked for the boy’s father and pretended he had a package to deliver.

However, as soon as the unsuspecting dad confirmed his identity, the killer pulled out a gun and shot him in the head.

As his horrified son looked on, the murderer then shot the man in the chest on the floor before making a speedy exit.

Twitter was quickly awash with comments from stunned viewers – with many of them not expecting the show to get off to such an intense start.

Taking to social media, one fan remarked: “I’ve not watched The Bay before but the first few minutes were shocking. #TheBay.”

Another added: “What a start. Unbelievable stuff #TheBay.”

Meanwhile, a fourth chimed in: “So far so good! When Series one finished I really didn’t think they could’ve continued… but damn I’ve been proven wrong!

“Just from the opening itself I can tell this is gonna be good! #TheBay.”

“The Bay is off to a cracking start,” a fifth praised.

Series one of The Bay was met with mass praise and critical acclaim when it aired in March 2019.

Set along the coastline in Morecambe, the show follows family liaison officer Lisa Armstrong, played by Morven Christie, who was working on a case of two teenage twins who had vanished.

Series two picks up with Lisa, who is on probation for the way she handled herself in the twins case, being assigned to the doorstep murder case.

Insisting the show is more than simply death and suspicion but also about the stunning scenery, ITV executive producer Catherine Oldfield said: “No one’s ever set a drama there and it is an exceptionally beautiful place.

“When (writer Daragh Carville) said it was set in Morecambe, which he can see out of his writing room on the top of a hill in Lancashire, where he lives, it was a no-brainer.

“There was no point looking anywhere else. Morecambe was it.”