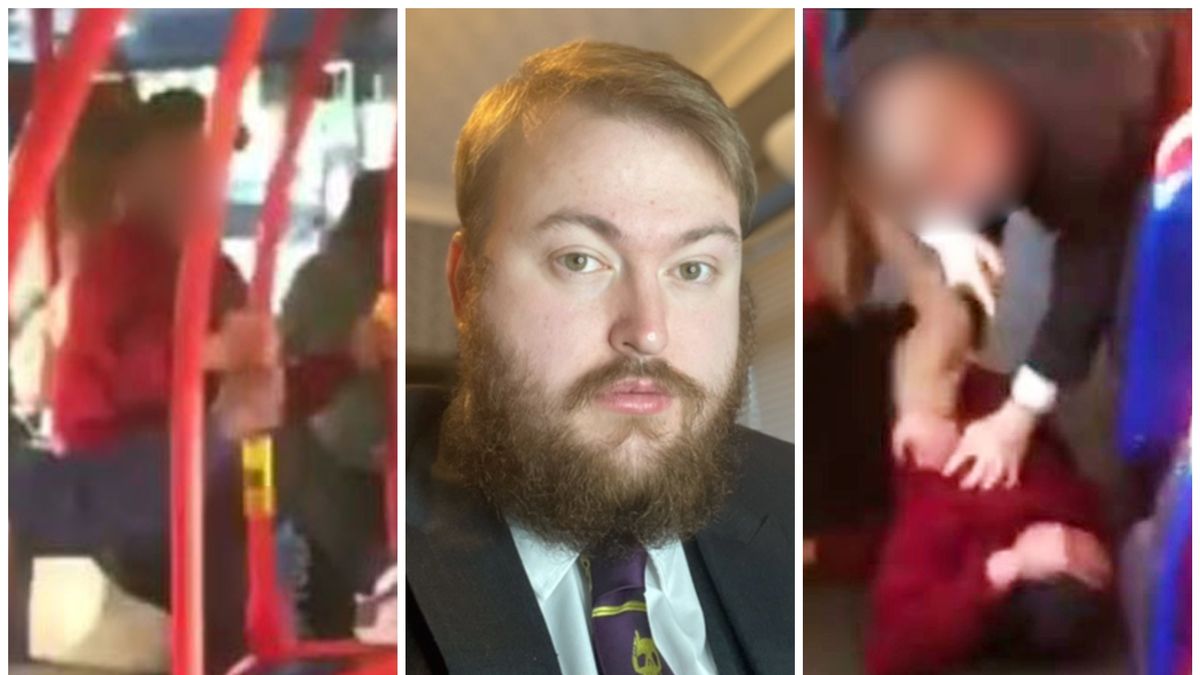 A banker claims he was sacked after confronting a bus passenger who allegedly kicked a teenage girl in the face.

Kizu Stanford, 26, says he intervened to defend the 16-year-old after a row about a face mask turned violent.

But he says he was dismissed from his job at Lloyds Bank after the footage went viral online, BirminghamLive reports.

He was sitting on a bus when a couple allegedly began verbally abusing a mum without a face mask who was with her child, he claims.

A teenage girl stuck up for the mum but was also abused, he said.

Footage of the incident in West Bromwich, West Midlands allegedly shows a man kick the teen in the face as he tried to get off the bus.

Mr Stanford, who was in his uniform, then stood up and wrestled a man to the floor.

The former bank clerk, of Wednesbury, West Midlands, screamed: “What the f*** are you doing. You piece of s***. I will murder you.”

He then threw a man in a headlock off the bus.

Kizu says he told colleagues about the incident and one reported it to management after the video went viral.

Two days later he says he was suspended without investigation.

He was later dismissed on the grounds of gross misconduct on November 29, a week before his birthday.

Mr Stanford said: “As soon as I saw the man kick the young girl I knew I had to act, but I didn’t for one second think that my actions would lead to me losing my job.

“The attacker was bullying a defenceless young girl and I did what I thought was the right thing to protect her.

“I don’t regret it at all, but I do regret the fact that Lloyds Bank has chosen to sack me.”

He said it “has been hard” as he is now unemployed “at a really difficult time”, adding: “I don’t think what the bank has done is fair at all.”

His trade union BTU has launched an appeal to reinstate him, saying he had been dismissed after a “superficial assessment of his case”.

It said police had taken no action against him and he was helping officers “in the case against the attacker”.

A BTU spokesman added: “No reasonable employer would have dismissed him.”

In a statement, a spokesman for Lloyds Banking Group said: “We are following our normal internal processes; however it would be inappropriate for the Group to comment on an individual’s circumstances.

“Our Group has a colleague code of responsibility in place to safeguard both our colleagues and customers and we do expect all colleagues to adhere to this.”

He went on: “Our code is a reference point for every colleague and sets out how we work responsibly and professionally.”

West Midlands Police has been contacted for further information on the incident that saw one man arrested and released on bail.