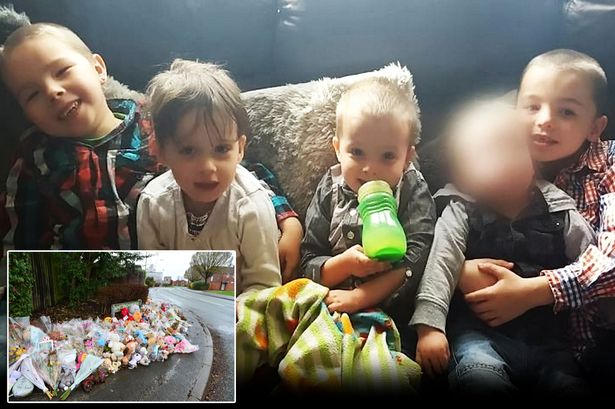 A fire which killed four young children was caused by fumes from a discarded cigarette, an inquest into their deaths heard.

Their mum and dad Natalie Unitt and Christopher Moulton were initially arrested on suspicion of manslaughter by gross negligence.

But police later confirmed no further action was being taken against them after a file was passed to the Crown Prosecution Service.

The blaze was likely to have started in the main bedroom, an investigation by Staffordshire Fire and Rescue Service found.

The couple disputed the experts’ conclusions at the coroner’s court hearing on Thursday.

But they admitted they had both been smoking in bed, despite a previous warning from social care services.

This then caused a ‘flashover’, with everything in the master bedroom becoming alight before spreading to the landing.

The parents said they had woken up to discover the fire, with Ms Unitt describing the first thing she was aware of was a ‘heaviness’ in her chest.

“I still have nightmares about it now,” she said.

But she told the inquest she could not recall exactly what had happened as she had been suffering post-traumatic stress since then.

Mr Moulton said he was unable to reach the four children sleeping in other bedrooms, and suffered serious burns to his hands during the fire.

Their youngest child, aged two at the time, survived the fire as he had been sleeping near his parents.

The couple told the inquest they had escaped via their bedroom window.

Police and fire investigators noted there were discrepancies in the parents’ accounts,  in relation to each other and to the evidence found at the scene.

West Midlands Fire Service’s Leigh Richards said he believed the fire started with a discarded cigarette on the bed.

Mr Richards suggested Ms Unitt had gone downstairs to get water to throw on the fire, but was unable to get back up to the bedrooms.

He said she appeared to have escaped via a downstairs door.

South Staffordshire coroner Andrew Haigh recorded a narrative conclusion, saying it was due to fumes from the fire caused by unextinguished cigarettes.

Describing the deaths as a “tragedy”, he added: “My hope is the children died quite peacefully in their beds.”