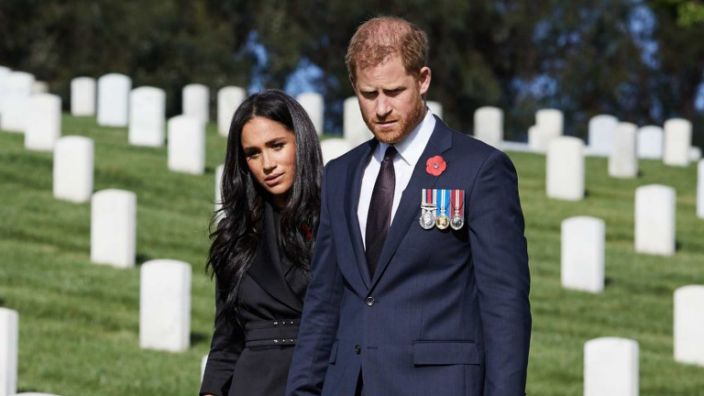 While Meghan Markle and Prince Harry are far away from the United Kingdom, they had their private visit at the Los Angeles National Cemetery to mark the event.

Following the move, several photos of the couple went public, featuring their flower-laying act at the gravesites of two Commonwealth soldiers. Reports said that they served in the Royal Canadian Artillery and the Royal Australian Air Force.

They may have paid tribute and “remembered” the soldiers in a genuine manner. But, the public does not seemingly feel the same way causing many to criticize the couple. One of these individuals is the Duchess of Sussex’s sister, who asked Meghan to “apologize,” according to the Daily Express.

Meghan Markle’s half-sister deemed the photos as “inappropriate.” She told talkRADIO that the former working royal should “apologize” for the move.

Host Dan Wootton clarified whether Samantha Markle is, indeed, calling her sister out to apologize. Without hesitation, she responded, “absolutely,” adding that the move was “horrible.”

She continued that any “decent person” would do it “out of kindness,” as well as “humanity.” She should have never allowed it to get this far, Samantha noted.

After their visit, Meghan Markle and Prince Harry’s spokesman stated that this is very “important” to the Sussex couple. It is essential for them to “personally recognize” Remembrance to “pay tribute” to the people who served and gave their lives.

Reports, later on, shared that the Duchess of Sussex handpicked the flowers from their home garden. Aside from it, they also placed a wreath at an obelisk standing on the grounds of the cemetery. Based on photos, the royal-born Prince signed the wreath stating, “To all of those who have served, and are serving. Thank you.”

The rift between the palace and Harry and Meghan is likely to deepen again. Why the need to take a PR photographer and publicise your “private” act of remembrance? https://t.co/XM8fBCcb6E

A report from Insider discussed the public’s opinion about the photos. Several royal experts and commentators expressed their “disgust” and anger toward the photos, as well as the Sussex couple.

Dawn Neesom stated that she saw the materials as soon as it went public. She continued that it “sickened” her because it looked like a “fashion shoot.”

Were Harry and Meghan looking for publicity for their Remembrance Day pictures or just paying their respects to the fallen?@Piersmorgan says it was a ‘distasteful PR stunt’… @Susannareid100 disagrees saying he has to show he’s paid respects.

Piers Morgan also had similar thoughts about Meghan Markle and Prince Harry’s move. He said that it has since appeared to be a “distasteful PR stunt.” Likewise, Richard Palmer shared his thoughts on social media. He rhetorically asked why the Sussex couple needed to take a PR photographer and make their “private act of Remembrance” known.