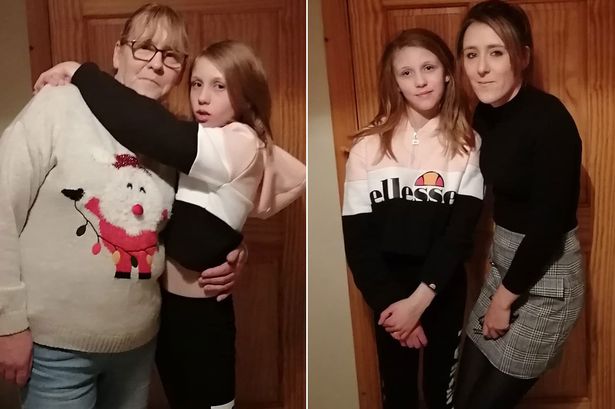 A schoolgirl’s tragic death has helped save the lives of four people after her family made the difficult decision to donate her organs.

The Year 8 Drumragh Integrated College pupil had spent several days on life support before passing away.

Mum-of-three Danielle, 30, is now on a fundraising mission for a children’s mental health charity so “other families don’t have to go through” what her family have, reports BelfastLive.

She said her late sibling will “forever be in our hearts”, describing her as a “bubbly character, full of love and care for those around her”.

Danielle said Shania and Bronagh, from Killyclogher, near Omagh, spent Christmas Day and New Year with her at her home with the memories made to “last a lifetime”.

“She was my baby sister and I will treasure every photo, video and memory we shared over the past 11 years,” she added.

With Shania in hospital, the family made the “difficult but rewarding” decision to donate the schoolgirl’s organs, explained Danielle.

She added: “Mum and Shania were like two peas in a pod, mum will be lost without her.

“Shania was the heart and soul of Richmond Park, she loved to visit her elderly neighbours and their grandkids, they all have fond memories of our Shania.”

Danielle said her sister was an animal lover and often volunteered to helping at a local veterinary centre.

The McAshee family has organised fundraising walk Stairway to Heaven for charity YoungMinds to mark what would have been Shania’s 12th birthday on May 9.

Danielle went on to say: “Kids need to know that it is OK to show emotions and that it’s nothing to be ashamed of. We don’t want another family to go through what we did.”

A fundraising page set up on January 20 hit its £1,500 target within a few short hours.

Having set up the fundraising page on January 20, Danielle said she couldn’t believe it when within a few short hours they had reached their goal of £1,500.

You can find the fundraising page on  Facebook here.