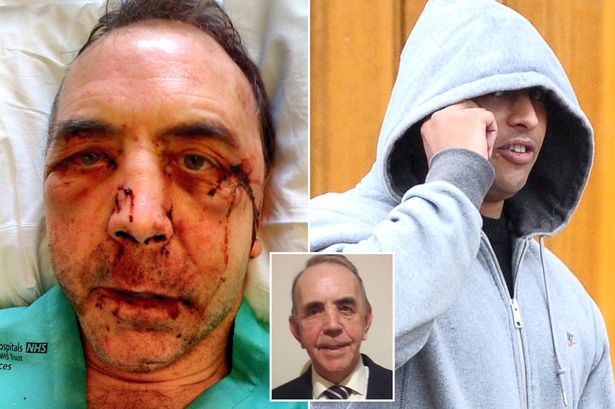 A headteacher has been forced to relive the moment he ‘nearly died’ after an ex-pupil viciously beat him unconscious.

It comes as former student Jermaine Bullen was sentenced to 12 months in prison for possession with intent to supply.

For Kieran Heakin, Jermaine’s former headteacher, seeing his attacker’s name in the media has forced him to relive the awful memories.

Mr Heakin was left in a pool of his own blood after Bullen, 37, attacked him in an Indian restaurant in 2009.

Onlookers reported the attack was vicious and relentless, but Heakin remembers little about the incident.

He said: “That night, I walked into the restaurant, Bullen came over to me straight away.

“He smiled and said ‘hello Mr Heakin, do you remember me?’

“I did not immediately recall his name but he looked familiar. I said tell me your surname and I will tell you your first name.

“He said ‘Bullen,’ and I replied ‘you are Jermaine with a J.’ He said yes. We chatted for a while about his classmates and then we both sat down.”

Kieren says that the next he knew he was waking up in an ambulance.

“I had been unconscious for over an hour and the ambulance staff were very concerned,” Kieran said.

“I nearly died that night.”

The attack was so vicious that Heakin’s friends and other onlookers thought he had been killed.

“His vicious, unprovoked attack on me was nothing to do with anything I did as his head teacher,” Heakin asserts.

“When I met him in the evening he was out of his head on drugs.”

Heakin subsequently spent two weeks recovering in hospital, and has suffered permanent deafness in one ear and the loss of his senses of taste and smell.

Describing his injuries, he says: “My jaws were wired together for six weeks, during which time I was on a liquid diet.

“I suffered from very painful mouth ulcers where the wires bit into my mouth. I am deaf in one ear and have no sense of taste or smell.

“I have been denied the pleasure of looking forward to my favourite food and I miss the food based chatter and discussions about food with my friends and family.”

After the attack, Bullen was sentenced to prison for a minimum of three years.

Bullen has subsequently been given a 12 month sentence for dealing cannabis after being arrested in October 2020 during a police raid at his house and admitting possession with intent to supply.

Officers retrieved a 1.5kg bag of cannabis, worth £3,090, as well as other equipment commonly used in drug dealing.

Despite the huge physical harm done to him, devout Christian Mr Heakin has managed to forgive his former student for his assault.

Speaking after Bullen’s most recent conviction, he said “I feel very sorry for Jermaine and his family. He is going to deprived of his liberty for several months.

“When he was sentenced for attacking me he said that he had learnt the error of his ways. It seems he has not learnt his lesson.

“I just hope that he can find some peace in the future and become a good role model for his son.”

Iconic 20th-century Couture Designs to Be Auctioned in Paris

Baby ripped out by ‘womb raider’, now 16, has ‘closure’ after mum’s killer executed