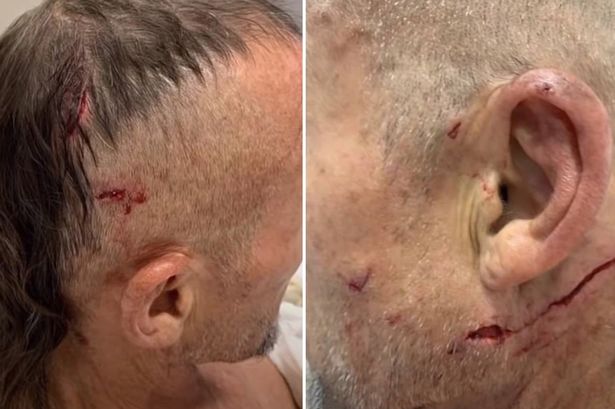 A brave swimmer who managed to prise the jaws of a 6ft 5 crocodile off his head during a horror attack has opened up about the traumatic incident.

Mark Ridge was taking an afternoon dip at the Lake Placid in Cairns, Queensland, on Thursday, January 28, after an unexpected attack from the huge beast led to severe injuries.

The 44-year-old father suffered cuts to his hands, shoulder, head and face after the croc managed to clamp his huge jaw around Mark’s head.

Luckily, the Aussie was able to wrestle himself free and made his way to the shore where he was helped by passers by.

He was rushed to Cairns Base Hospital and remained alert and awake during the traumatic ordeal.

Mr Ridge’s daughter Mili said he is “in pain” but will be fine.

Pictures show the extent of the injuries caused by the near-deadly attack with lacerations to Mr Ridge’s neck and head.

Critical care paramedic Paul Sweeney told 9News: “When we got there, he was remarkably calm and it was clear there were puncture marks on his head.

“He described to us that the crocodile had bitten his head and he had tried to pry its jaws off his hand and as he did so, its jaws snapped on his hand.”

Mr Ridge told paramedics he swims at Lake Placid multiple times and a week, and was described as being “very fit”.

He reportedly said he believed the croc to be 1.5m to 2m long – around 6.5ft – and he believed it to be a saltwater species.

The brave dad is lucky to be alive as Mr Sweeney said the bite could easily have been deadly if the reptile’s teeth punctured any arteries.

Queensland Environment has confirmed that a team of wildlife officers have been dispatched to the site to search for the crocodile.

Virginia school principal, assistant principal depart after 6-year-old shoots teacher: “the administration could not be bothered”