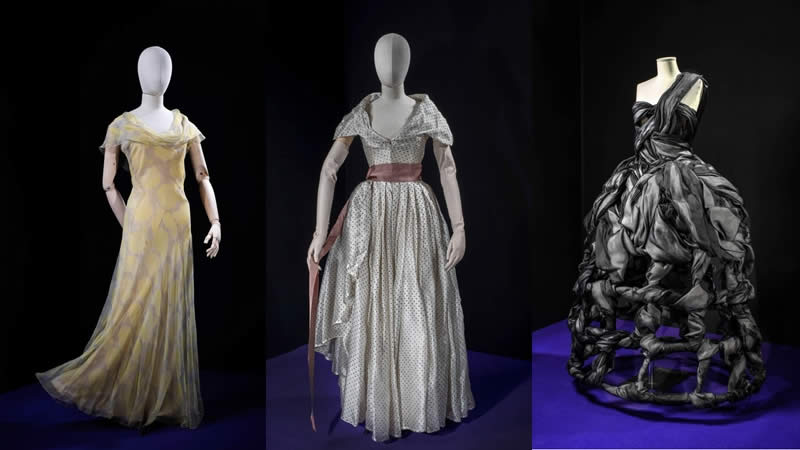 The 545 lots include designs by Balenciaga, Givenchy, Chanel, Alaïa, Montana and around 100 pieces from Anne-Marie Beretta’s personal archive, and men’s wear.

A HISTORY OF COUTURE: On Feb. 11 and 12, an expansive collection of haute couture and vintage designer pieces spanning the entire 20th century will go under the hammer at the Cornette de Saint-Cyr auction house in Paris and online.

The sale includes 445 pieces that come from the collections of the Maison de Mode Méditerranée à Marseille, a talent incubator that supports young fashion designers from France and the Mediterranean region. Proceeds will go to the MMM’s endowment fund. Many of the earliest silhouettes — by luminaries from Madame Grès and Mariano Fortuny to Gabrielle Chanel, Elsa Schiaparelli and Hubert de Givenchy — were often purchased at auction, with MMM’s founder Maryline Bellioud-Vigouroux taking advice from her friend, the late Azzedine Alaïa, she wrote in a preface to the auction catalogue.

Although museum-worthy pieces are expected to hit several thousands and higher, unsigned pieces and accessories, as well as easy daywear pieces, start at around 150 euros to 300 euros.

“Our goal is to give these pieces a new lease on life — be it in a museum for iconic designs or as pieces to be still worn today by people who are looking for [looks] no longer available in today’s fashion offer,” said Hubert Felbecq, director of fashion and Haute Couture at the Cornette de Saint Cyr auction house.

The first day will focus on more than 230 haute couture designs from 1910 to 2000. Among the pieces expected to attract heavy attention from institutions and collectors are a 1922 Chanel evening cape in ruby-red silk velvet and georgette with a marabout trim; a Mariano Fortuny evening coat in block-print silk from the 1930s; an opulent Christian Lacroix gown from 1990, and a 1999 dramatic Belle Epoque-style pink changeant silk gown designed by Alexander McQueen for Givenchy, estimated to go for between 4,000 euros and 6,000 euros.

A 1938 Schiaparelli coat from the “Zodiaque” collection, recently exhibited in the “Man Ray et la Mode” exhibition at the Musée du Luxembourg in Paris, is estimated to fetch from 15,000 euros to 30,000 euros. A near identical design was donated to the Philadelphia Museum of Art by the couturier in 1969.

Another highlight of the sale will be costumes designed by Lacroix for a 1988 production of the “Goethe — Wilhelm Meister” play, inspired by the German author’s 1795 novel “Wilhelm Meister’s Apprenticeship,” as well as their preparatory sketches. Magazine collectors will want to snap up a lot of 250 French Vogue issues from 1924 to 1961, estimated around 3,000 euros.

On the second day, the 1980s and its rising designer generation will take center stage, from Alaïa and Kenzo to Thierry Mugler and Jean-Charles de Castelbajac. Anne-Marie Beretta contributed 100 pieces from her personal archive, spanning two decades from 1980 to 1999.

A private collector’s wardrobe of designer men’s wear looks from the 1980s will be part of the Feb. 12 sale.

The 100-strong lots include a made-to-measure Michel Schreiber suit once owned by former French president François Mitterand; a selection of striking Jean-Paul Gaultier Homme, including a burgundy double-breasted suit with a black-and-white checkerboard design across the shoulders and chest; a fringed gaucho jacket, and an evening look made of an embroidered cropped shantung spencer and matching trousers with suspenders. Other pieces range from Claude Montana leather jackets circa 1985 to an expansive selection of Gianni Versace looks and accessories.

Ahead of the sale, an exhibition of the pieces is planned to be open to the public from Feb. 3 to 10 at the auction house, subject to public health guidelines, on Avenue Hoche. It will also be accessible online at cornette-desaintcyr.com

Queen’s ‘favourite’ grandson being encouraged to fill the royal gap left by Harry and Meghan: report

Get the Shoes Design of your own…!

Make your Feet Tip-Toe with the Red Socks