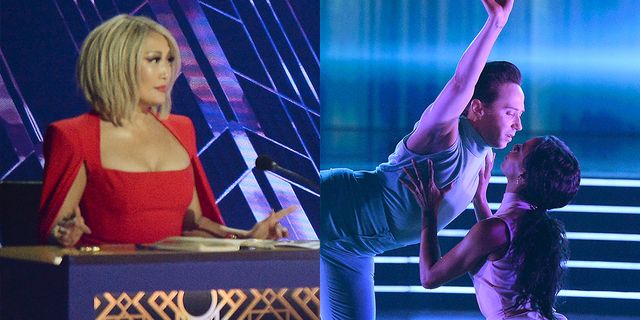 To say Dancing With the Stars fans are unhappy with Monday’s double-elimination show is a giant understatement.

After seeing the results of the semifinal round, viewers were downright outraged that Johnny Weir and Britt Stewart, along with Skai Jackson and Alan Bersten were sent home. Although host Tyra Banks warned fans at the beginning of the show that two couples would be sent packing this week, viewers were shocked with the outcome once the votes were counted.

First to get the boot was Johnny, despite earning a perfect score the week before for his and Britt’s Quickstep. Unfortunately, when combined with fan votes though, the Olympian didn’t earn enough of them to stay in the competition.

As for Skai and Alan, they landed in the bottom for similar reasons, even though they received an impressive 27 out of 30 for last week’s Paso Doble. Ultimately, their fate rested in the hands of judges Derek Hough and Carrie Ann Inaba, who voted to advance Justina Machado and Sasha Farber instead of them to the finals.

Reacting to the news, viewers aired their grievances on Twitter, with some threatening to “stop watching” the show. “Nahhh next week we should all boycott the show and not watch it just because they kept nelly and eliminated skai. literally so unfair …” one fan tweeted. “Skai and Alan were inconsistent but they were still more deserving than Nelly for that spot in the finale!!!!” another said. “JOHNNY SHOULD BE IN THE FINALE! Kaitlyn and Nelly over Johnny and Skai?? [No] way,” a different fan commented.

Meanwhile, others complained that the show had turned into a “popularity contest” instead of a competition that judged ballroom dance skills. A similar complaint was made when Bobby Bones took home the Mirrorball trophy back in season 27.

Despite the negative fan reactions, the show must (and will!) go on, as Nelly and Daniella Karagach, Kaitlyn Bristowe and Artem Chigvintsev, Nev Schulman and Jenna Johnson, and Justina Machado and Sasha Farber compete this upcoming Monday for the season 29 title. Boycott folks aside, those who will be tuning in should remember to vote — clearly, it makes a big difference.