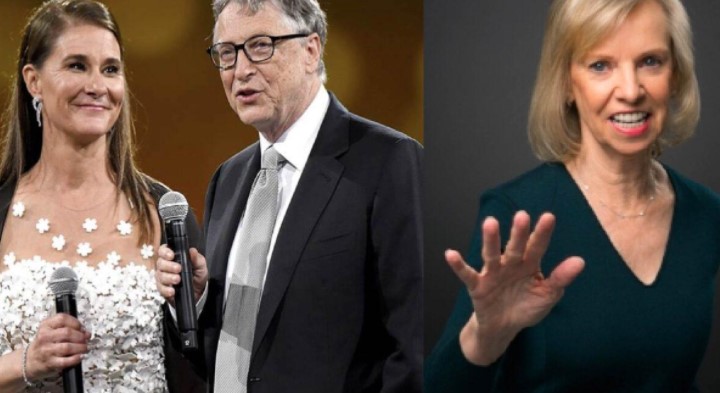 Yuk. Is Bill is a kinky geek, living a “swinger” lifestyle?

Earlier this week, billionaires Bill and Melinda Gates shocked the world when they announced that they are divorcing after 27 years of marriage. In the wake of this announcement, it’s been revealed that throughout his marriage to Melinda, Bill took annual beach vacations with his ex-girlfriend Ann Winblad.

A 1997 Time Magazine profile of Bill has just resurfaced in which Walter Isaacson discussed the Microsoft titans relationship with Ann in-depth, saying that they spent a long weekend together on the beach once a year with Melinda’s blessing.

“Another of Gates’ vacation companions is Ann Winblad, the software entrepreneur and venture capitalist he dated during the 1980s,” Isaacson wrote.

“They met in 1984 at a Ben Rosen-Esther Dyson computer conference and started going on ‘virtual dates’ by driving to the same movie at the same time in different cities and discussing it on their cell phones. For a few years she even persuaded him to stop eating meat, an experiment he has since resolutely abandoned.”

“They broke up in 1987, partly because Winblad, five years older, was more ready for marriage,” he continued. “But they remain close friends. ‘When I was off on my own thinking about marrying Melinda,’ Gates says, ‘I called Ann and asked for her approval.’ She gave it. ‘I said she’d be a good match for him because she had intellectual stamina.’”

“Even now, Gates has an arrangement with his wife that he and Winblad can keep one vacation tradition alive,” Isaacson added. “Every spring, as they have for more than a decade, Gates spends a long weekend with Winblad at her beach cottage on the Outer Banks of North Carolina, where they ride dune buggies, hang-glide and walk on the beach.”

Many were surprised that Melinda would be onboard with this, given the fact that Isaacson highlighted the strong connection that Bill and Ann had.

“They were kindred minds as well as spirits,” he wrote of the exes. “On a vacation to Brazil, he took James Watson’s 1,100-page textbook, Molecular Biology of the Gene, and they studied bioengineering together. On another vacation, to a Santa Barbara, California, ranch, she took tapes of Richard Feynman’s lectures at Cornell, and they studied physics.”

This week, Bill and Melinda announced that they are divorcing because their marriage is “irretrievably broken,” and many social media users are speculating that Ann could have had something to do with the split.

“We no longer believe we can grow together as a couple in this next phase of our lives,” Bill and Melinda said in a statement.

They have since each hired A-list attorneys to represent them in the divorce proceedings, indicating that this breakup is only just starting to heat up.

Wounded & Alone, Puppy Climbed Onto Abandoned Porch And Dreamt Of His Angels