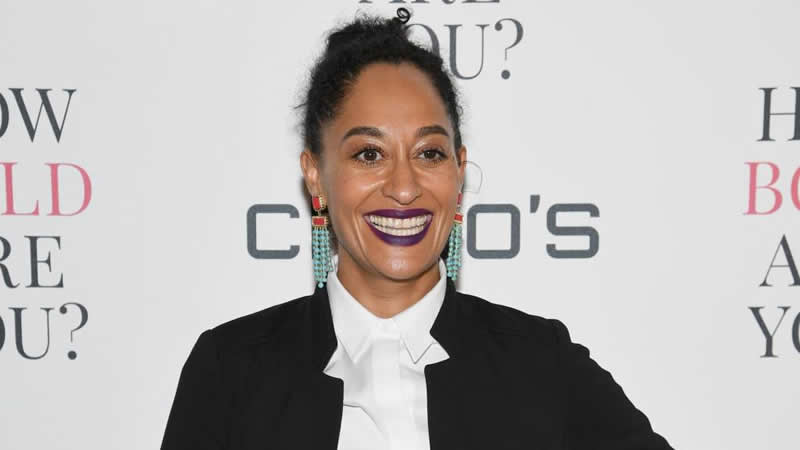 If your mom is style icon Diana Ross, you’d better borrow early and often from her epic closet. That’s exactly what her daughter and actress Tracee Ellis Ross does — and to an amazing lookalike effect when she recreates one of Diana’s supreme looks.

In a recent series of Instagram posts, Tracee paid tribute to her mama by donning the same killer statement necklace and striking the same dramatic pose as Diana did in a photo that was likely taken in the late 1970s.

Read Also: Tracee Ellis Ross Gets Comfortable In Her Backyard Posing in a Blue Bodysuit with Holes

It all started when Tracee realized she still had that beaded macrame necklace in her closet (see, “borrowing” from her mom’s closet pays off) and matched it to an archival image of her mother.

While she didn’t have the same earrings or top, with a neckpiece that dramatic, it totally didn’t matter. The resulting “mama” and “me” photos are so similar, you might do a double-take.

Of course, Tracee did put on a pair of gold hoops similar to the ones her mother wore. She opted for a modern take on a gold sequined top, however, instead of wearing a bright yellow tank top.

Tracee’s sleek bun, smokey eyes, and wine-stained lips completed the doppelganger masterpiece. And, oh yeah, according to Vogue, Diana herself was the hair and makeup artist for this photoshoot!

Part of the reason this mother-daughter duo looks like twins at whatever age they are is that they seem to have discovered the key to eternal youth. Both Diana and Tracee are now and have always been major babes.

What’s the secret? According to the “five commandments for staying young” that Tracee dropped in an Instagram video in October 2019, it’s pretty simple — and surprisingly fun!

“One, giggle as much as possible. Two gotta get your sleep. People say sleep when you’re dead; I don’t agree. Sleep when you’re tired. That’s what you do if you can,” Tracee advised, continuing, “Three, drink so much water.

Like, seriously. Hydrate, hydrate, hydrate! Four, have as much sex as possible. Sorry, Mom, but it’s true! Brings out the best in your skin,” she said. “Love with a full and open heart! You’ll stay young forever, I swear.”

Ross, however, is the first one to say she “didn’t wake up like this” and that her beauty and fashion are a result of effort and her mom’s good genetics and role modeling.

Last November, in her acceptance speech at the People’s Choice Awards for her fashion icon award, Ross expressed how her mother has influenced her style over the years.

“Obviously, I have to thank the icon herself, my mom—not only for her great parenting … but also her example, her sense of style, her epic closet, and her glamour that introduced me to the power of fashion,” Ross said in her speech.

“After she would finish a show and the curtain would fall, I would go on stage as a little girl and I would collect all of the beads that had fallen off of her sparkly dresses so that I could have pieces of the magic, seeds of the fashion dreams that I was cultivating for myself.” – sheknows

5 Tips on How to Console a Man