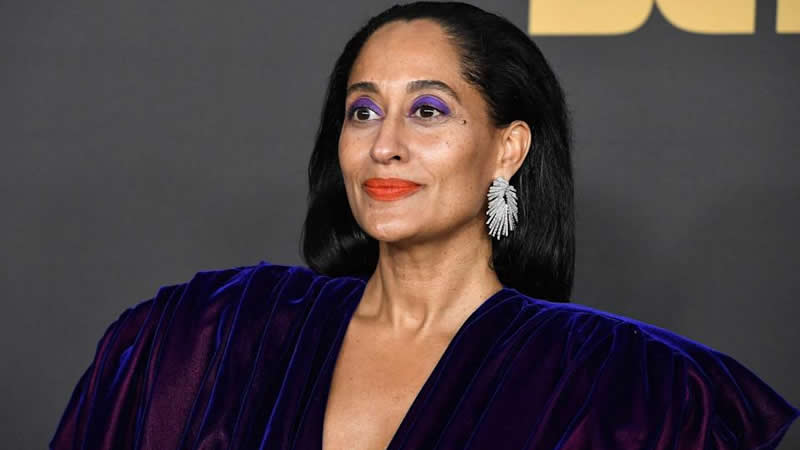 Tracee Ellis Ross’s upscale look came with a twist of trend in her new media upload as she tweaked her fashion choices while opting for a coordinating look in her backyard.

Tracee Ellis Ross loves her home, and it is quite evident from the photos she has posted and snapped in different sections of the sprawling abode.

In her new media post, she opted to show off her backyard and its greenery. Ross’s show of style was a slight switch up from her usual vibrant colors. She opted for a turquoise jumpsuit.

Ross’s outfit stretched from her neck down her legs. The long sleeve catsuit-inspired dress had tiny cut-outs all over with sheer details that showed off her luminous skin.

The star actress matched up her suit with a pair of stilettos, while her dark curls were slicked into two french plaits. She sat in a relaxed pose on her backyard stairway, flaunting her no-makeup glow. Ross captioned:

“Backyard ting. Also, when you don’t want to take the clothes off from work.”

Recent updates on the style icon showed that she teamed up with Pyer Moss for its short film titled “Production and Persuasion.” This is in line with the reopening of fashion shows.

The short film released a few days before Memorial Day was a third installment in the brand’s “Always Sold Out Series.” The film project is part of Pyer Moss’ content rollout for their coming collections.

The actress stated that she would love to be married and have children, but she was just as happy without marriage.

Over the years, the actress has garnered recognition for her experience and outstanding performance in the movie industry. However, she had to face societal issues concerning women and marriage.

Ross, 48, decried how women’s successes are tied to marriage and childbirth. She relayed that society basically spoon-fed the narratives to females.

The actress stated that she would love to be married and have children, but she was just as happy without marriage. She noted she still hoped to start a family but wouldn’t beat herself about not having all that yet.

Over the weekend, Ross joined music boss Diddy and many other big shot stars at his home for a merry Memorial Day celebration. She, alongside stars like Janelle Monae, Issa Rae, and Lala Anthony, had a field day.

In one of the videos shared on Instagram, Ross and Diddy celebrated black excellence and creatively promoted each other’s brands. While she promoted his Ciroc Summer Citrus, Diddy gushed over her Pattern Beauty conditioner.