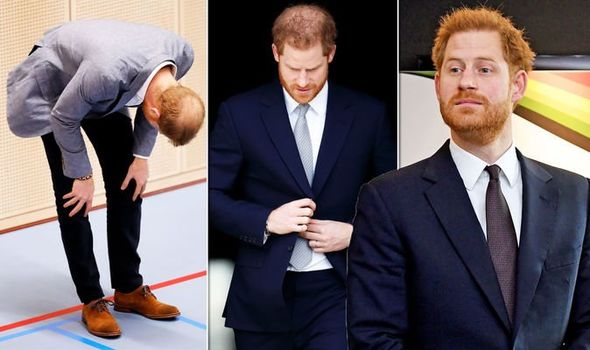 A picture posted on the Twitter account HarrysGreySuit on December 7, 2022, has prompted much speculation about Prince Harry’s accelerated hair loss. The comment section has been piling up. One user, @maryj1309, said: “Harry is completely bald… that’s all I can see.”

Another fan, @ennk08, is more skeptical: “It’s an obvious Photoshop; look at Harry’s hand, or what seems to be Harry’s and. The placement is upside down. “The thumb should be upwards but it’s downwards. Obviously a fake photo.”

Speculation about Prince Harry’s hair loss is nothing new. Doctor Asim Shahmalak, a consultant hair transplant surgeon at Crown Clinic, stated back in March 2020 that Prince Harry’s “bald patch has more than doubled in size”.

Speaking to the Crown Clinic, the hair loss expert said: “[Prince Harry’s] bald patch is most noticeable around the crown area but his hair is thinning fast towards the front of his hairline, too.”

Doctor Shahmalak warned of the “Windsor baldness gene”, adding that “Prince Harry has just been unlucky” – “that gene has really kicked in”.

Addressing a common myth, Doctor Shahmalak verified that baldness is not only passed down on the mother’s side.

“Harry has the baldness gene in both sides of his family,” said Doctor Shahmalak. “He was always at a high risk of suffering male pattern baldness.”

Prince Harry recently poked fun at his thinning hairline at the fifth Invictus Games in The Hague, Netherlands, People reported.

The hormone testosterone is converted into DHT (dihydrotestosterone), which has an “adverse effect on hair follicles”.

In the beginning, a receding hairline emerges, followed by thinning of the hair on the crown and temples; over time, hair production stops altogether.

Affecting 6.5 million men in the UK, most men will experience male pattern baldness, to some degree, by the time they are in their 60s.

Some people, like Prince Harry, will experience male pattern baldness much earlier.

“There are currently two medicines in the UK endorsed by the NHS as viable treatments for male pattern baldness,” said Doctor Taguri.

Treatments include finasteride and minoxidil, which work by reducing the conversion of testosterone to DHT.

“Taken correctly (one tablet a day, every day), finasteride can be extremely effective in reversing the effects of male pattern baldness,” added Doctor Taguri.

“In one study, 90 percent of men who took finasteride once a day for six months stopped their hair loss, and 60 percent even experienced regrowth of lost hair.”

If treatment stops, however, then male pattern baldness will return.

This is also true of minoxidil, which can be bought in high street pharmacies and online.

“It has to be rubbed into balding areas of the scalp every day to have an effect upon hair loss,” said Doctor Taguri.

Paris, Prince, and Bigi Jackson make a rare appearance together for ‘MJ the Musical’ opening