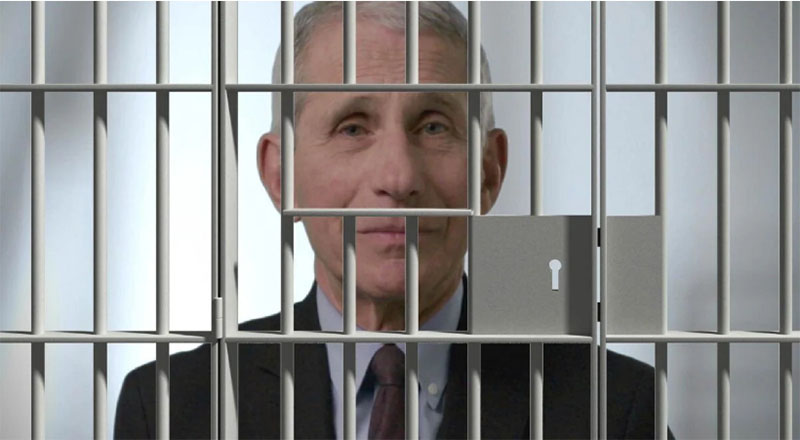 Dr. Fauci has gone from trusted COVID doctor to public enemy #1 in a record amount of time.

At first, many looked to Fauci for guidance on the COVID-19 virus, but soon, his flip-flopping and politicization took over and he lost the trust of the American people.

But now, thanks to this video, we know how much worse it really is – and as a result, many people believe little Fauci should be behind bars.

It all starts with an ironic twist – back in the day, Obama created so-called “safety mechanisms” that would halt research that had the potential to create a worldwide pandemic.

The study started some 10-years-ago at a lab in the Netherlands, but it quickly gained steam, and labs all over the world were studying how ferrets (who have a similar respiratory system to humans) reacted to viruses. They wanted to see specifically if they could “mutate” a virus and make it transmittable through the air.

(Yes, they could, apparently).

Wuhan, China took over as the lead laboratory researching “ferrets,” and was partially funded by the “National Institute of Allergy and Infectious Diseases,” headed up by Dr. Anthony Fauci.

The biggest safety concern of this type of study was that mutating and then researching a highly contagious virus came with a lot of risks, including the possibility it could escape (or be unleashed) and cause worldwide devastation.

That’s actually when Obama stepped in and halted the funding of the research.

Fauci, on the other hand, disagreed with Obama, and said that it was a “risk worth taking.”

“Despite the controversy surrounding this type of research.” This sort of dangerous science always had one steadfast champion, a leading figure in the world of infectious diseases, Anthony Fauci.

At the time Fauci co-wrote an op-ed in the Washington Post describing the research as “a risk worth taking… important information and insight can come from generating a potentially dangerous virus in the laboratory.”

This is Fox News host Steve Hilton’s Part I of the “deep dive” into Fauci and the origins of COVID-19.

Now, after much investigation, Steve Hilton claims that Dr. Fauci and his partner continued funding the controversial “ferret program,” even after they were told to stop.

Here is part II of his investigation and it’s a doozy.

People are outraged, and calling for Fauci’s head on a platter:

“Thank you Steve and others who actually work and research to reveal the facts of this pandemic. I question why is congress not investigating this? This virus has affected so many lives and is continuing too. We need facts not coverups. WE NEED KNOWLEDGEABLE PEOPLE WE CAN TRUST!!!”

“Dr. Fauci should be in handcuffs, not on CNN and magazine covers!!”

“The money ties are undeniable. If fauci tell american the true origin of this virus at the beginning of pandemic, last Jan, american might be better prepared”

“I don’t believe for a second this was an accident. Setting Fauci up to take the fall but there are probably hundreds if not more involved with him.”

“Covid19 virus origins circle back to the Democrats and media hero, Dr Fauci, and his partner, Dr. Collins NIH, secretly over-riding Obama’s ban on their mad scientist experiments of the SARS bat virus. This information is irrefutable, these two men MUST be held accountable!”

So, what did Fauci know about this disease before it even left the lab, and when did he know it – and what, if anything, did Fauci not reveal?

Why did he continue funding this program, even after he was told to stop, and what accountability should he face for that?

These are all great questions – but the problem we face now is that the left looks at COVID as the “savior” that finally took down President Trump, so they’re in no hurry to get to the bottom of anything…and who knows, there might be a lot more “nefarious” things uncovered about the origins of COVID-19 if a public investigation were to take place.

So, I don’t see the left calling for an investigation into the origins, even though this is supposedly one of the worst things to ever happen to the world.

However, this investigative journalism from Steve Hilton is so good, and so deep, and brings up so many questions, that it’s almost impossible to deny.

Dr. Fauci must be asked point-blank why he continued funding the “ferret” research, even after President Obama placed a moratorium on it…because as it stands now, this is all looking very suspicious.