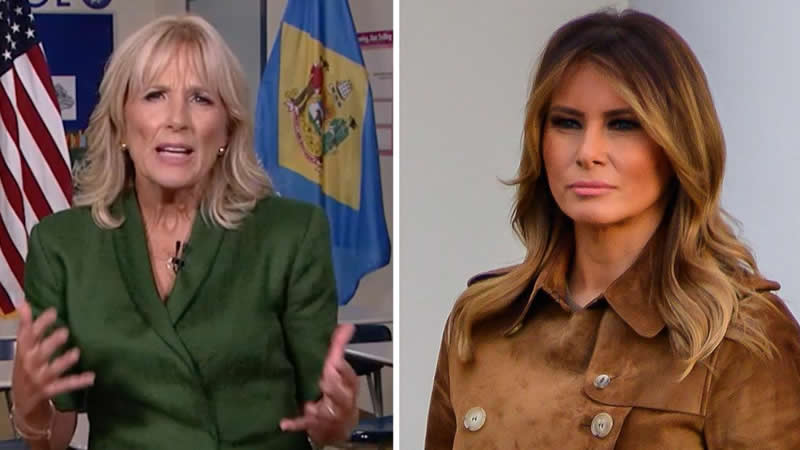 Brace yourself, because the worst has happened: our First Lady of the United States has stepped out wearing fishnet stockings. This was the tone struck by many on Twitter this weekend after FLOTUS Jill Biden was spotted wearing fishnet tights under her knee-length black skirt as she stepped off a plane in Maryland, after which many took to social media to suggest the attire was somehow inappropriate either for a woman of her age (69 years young, thanks very much) or the stature of her position.

As so many of Biden’s attention-drawing moments seem to these days, the fashion choice also prompted a spirited debate of whether former First Lady Melania Trump was held to the same level of scrutiny insofar as being scantily clad, with the public again pointing at her history of naked modeling photoshoots as evidence that Biden was not being criticized in good faith.

As Biden stepped out in the now infamous stockings (see photos here), which some are now claiming aren’t even so much fishnets as they are patterned tights, (some of) Twitter was quick to jump in with the assessment of her attire as “trashy” or calling it a “hooker look.” Others on Twitter quickly countered with examples of less PG photos of Trump that existed on the internet, as well as praising Biden’s character and condemning Trump’s.

When comparing Biden’s fashion history thus far as FLOTUS to Trump’s, some on Twitter have contended that Trump’s superior fashion choices were overlooked due to liberal media bias. The fashion choices that did receive media attention, however, like her “I don’t really care” jacket worn for visiting the border or the colonial-style pith helmet she wore on a trip to Kenya, had not criticized the first lady for lacking decency — at least not when it came to showing skin. Criticisms of Trump’s fashion revolved around the insensitivity of the message sent by her clothing choices: suggesting she didn’t care about the issues at the border, for example, or about the colonization of Kenya.