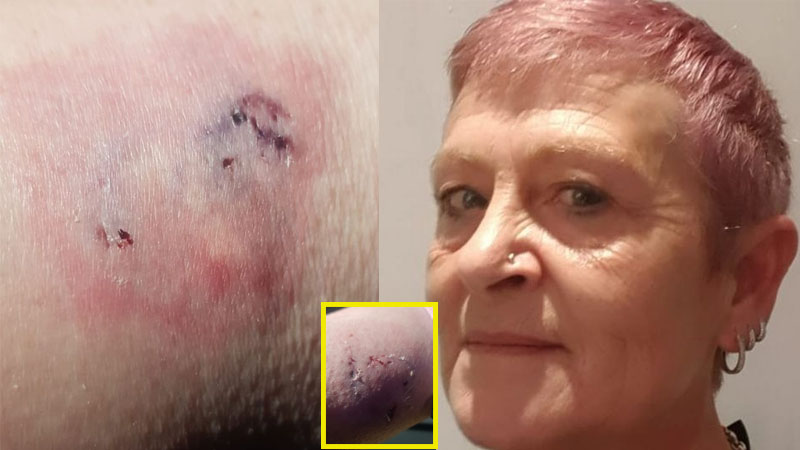 A teenage yob started punching and biting a coach driver after she refused to keep driving after a shift.

The attacker lashed out at grandmother-of-four Jane Brown, 59, on Friday, April 23, after she’d dropped off passengers at a shopping centre in Liverpool at midnight.

Ms Brown was about to finish her shift when the man snuck onto the coach and asked her to take him to the suburb of Aigburth.

The thug started insulting her after she refused and got up close to the Megabus driver.

Ms Brown told the Liverpool Echo: “He was right in my face so I pushed him away and he then started punching and biting me.

“I’ve got a thick lip, a bump on my head, and two big bite marks and bruises on my leg.

“It seemed to go on forever. I’ll need to check if I need a tetanus jab, or something.

“It’s left me shaken up, I’ve done the job for 20 years, but this is the worst thing that’s ever happened to me while working.

“I just kept thinking, “what’s going on?’ as he was attacking me.”

The attacker got away before police arrived at the scene, and Ms Brown is desperate for them to catch the “little toerag”.

“You don’t expect to come to work and deal with that.

“I feel so strongly about this that I’m going to put a cash reward so he is found.”

Back in January, a 16-year-old boy who assaulted a female police officer and left her with horrific facial injuries avoided jail.

PC Maddie Hayes required facial surgery and 17 stitches after being punched by the teenage thug as he was being handcuffed during a stop and search in Ashby, Leicestershire, on September 12 last year.

The brave officer released shocking pictures showing blood on her face, a deep gash on her nose and bruising to both of her eyes.

She needed three months off work following the vicious assault.

The youth, who cannot be named for legal reasons, admitted causing grievous bodily harm to a police constable at Leicester Magistrates’ Court in December 2020.

But he avoided a spell in youth detention as he was given a 12-month community service order.