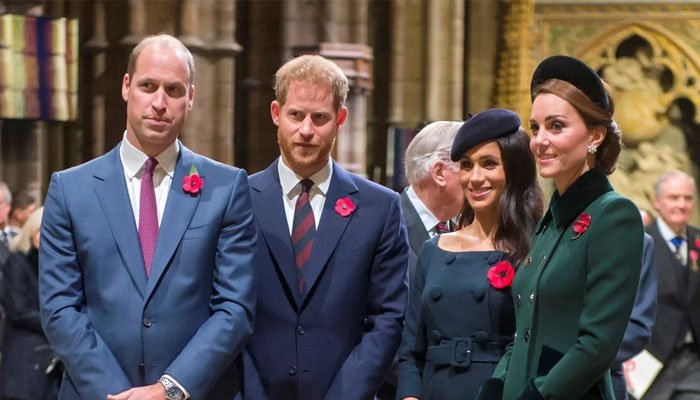 Prince Harry “must have known” his wife Meghan Markle would “throw Kate under the bus” during their bombshell Oprah tell-all interview, a royal writer has claimed.

Penny Junor told the Express, his elder brother, Prince William is now “pretty damn cross” with his brother for not “correcting” the claims.

Meghan Markle was accused of being “beyond the pale” for naming Kate in the interview knowing she “was powerless to fight back”.

In November 2018, it was reported that “Meghan left Kate in tears” over her demands for Princess Charlotte’s bridesmaids dress during a “stressful” fitting.

The rift between the two royals started when Kate said the bridesmaids should follow royal protocol by wearing tights which Meghan didn’t agree with.

But when asked if she had made Kate cry, Meghan told Oprah: “The reverse happened. A few days before the wedding she was upset about something, about… the flower girl dresses, and it made me cry. And it hurt my feelings.”

Ms. Junor said: “I would have thought one of the things William was most cross about was the fact that Meghan threw Kate under the bus.

“It wasn’t Harry, but it was his wife, and he must have known that she was going to do that and he hasn’t corrected it in any way.

“It depends how Kate is feeling.

“I must say I would be pretty damn cross.”.

Kate didn’t say anything about the interview in public.

Prince William and Prince Harry met for two hours at Prince Philip’s funeral and everyone hoped that it will create peace between them. But Harry went back to the U.S as he received a cold response from his royal family.

Prince Harry and Meghan are also set to join A-listers Jennifer Lopez and Selena Gomez at a Covid concert to “reunite the world”.

According to Sun reports, Harry and Markle have been confirmed as some of the big names taking part in the Vax Live show on 8th May 2021.

Vax Live is being billed as an event to “reunite the world” with performances from a host of stars.

It is not yet clear what the couple will bring to the table at the music concert but they have been given the title of “campaign chairs”.

They will lead a drive to raise money for COVAX – a vaccine-sharing program co-led by the World Health Organization.