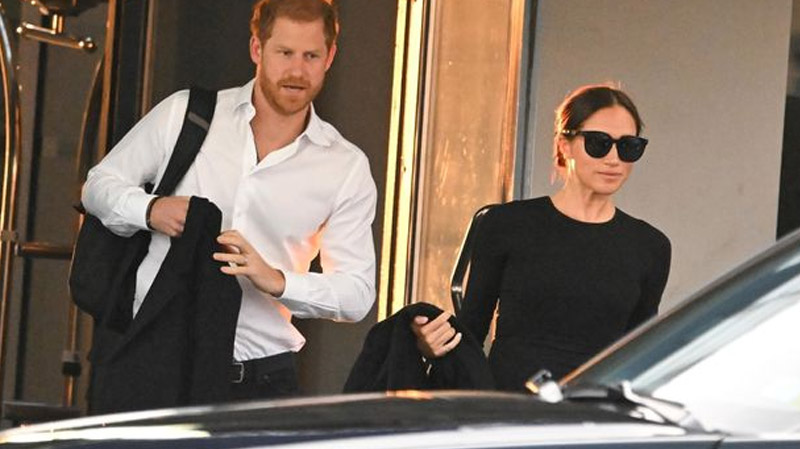 A smiling Meghan and Prince Harry have been spotted for the first time since the trailer for their bombshell Netflix docuseries were released.

The Duke and Duchess of Sussex touched down in New York City on a private flight this morning before making their way straight to an awaiting SUV.

They will be appearing at The Ripple of Hope ceremony tonight, which honors individuals for their charitable efforts, and is set to be hosted by Kerry Kennedy – niece of John F. Kennedy.

The royal pair will be receiving an award.

Their appearance comes on the back of the first glimpses of their new six-part series, made as part of their multi-million pound deal with the streaming service.

The project will reportedly be “utterly explosive”, experts claim, and it is feared it could portray other members of the Royal Family in an unflattering way.

One source in contact with a Netflix production insider said: “I genuinely think it’s going to be worse than the royals can imagine.

It comes after King Charles was seen looking pensive and stern-faced as he walked to church on the Royal Sandringham estate in Norfolk, accompanied by a friend on Sunday.

The monarch has kept a low profile since the controversial trailer was released on Thursday (December 1).

The minute-long snippet shows a number of previously unseen photos of the pair.

But it has been accused of using misleading footage after one photo showing a bank of paparazzi to reflect media intrusion into Harry and Meghan’s lives turned out to be from a Harry Potter premier over a decade ago.

The top-tier ‘Pioneer’ package includes four seats at the main table where the Duke and Duchess of Sussex are expected to be also seated.

The event is organized by the Robert F. Kennedy Human Rights organization.

Hollywood actor and producer Alec Baldwin will oversee the gala.

Ukrainian leader Volodymyr Zelensky and Bill Russell, a basketball great and civil rights icon, will both also be honored.