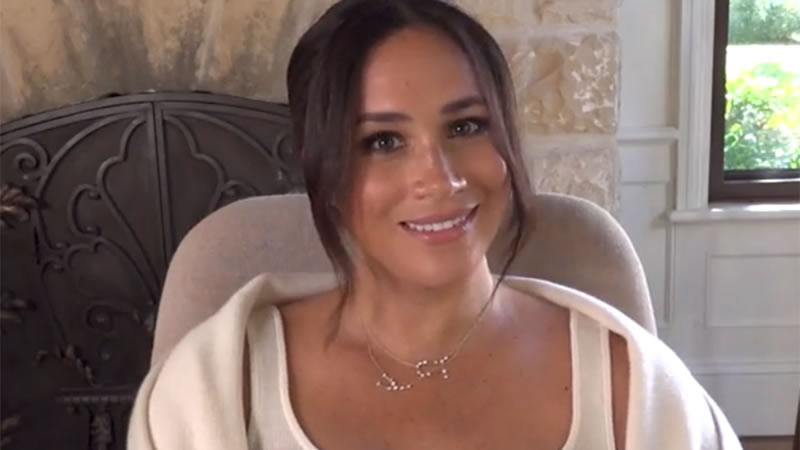 First, I’d just like to wish you a fabulous 40th birthday. I’m sure your adoring husband will have planned something gloriously romantic to make you feel happy and special today.

Who’d have thought all those years ago, when you were a teenager and your bedroom walls were plastered with pictures of Princess Diana, that one day you’d be married to her beloved son and be the mother of his children?

As you sit looking at Harry over the dinner table in your £11million mansion, it must be hard to believe that you actually wept to watch him walk behind her coffin on that terrible day in September 1997. Yet all these years later, here the two of you are with your perfect family.

You must be feeling pretty pleased that thanks to that young prince, every one of your girlhood fantasies – becoming rich, famous, even royal – has come to pass, even though you were separated not just by an ocean, but by a class and cultural divide.

But no class divide was ever going to be a problem for you, Meghan – not with the kind of confidence and self-belief, some might say arrogance – that makes you the powerhouse you are.

You might have been born a working-class girl in LA, but you were always going to be a Somebody, weren’t you?

And today you ARE Somebody. You’ve got a prince for a husband, two beautiful babies, the rescue dogs, the hen house full of rescue chickens, Oprah as a neighbour, a long line of A-listers popping around for dinner, and zillions of dollars worth of deals.

Yes, some of those deals have involved trashing the Royal Family you were once so desperate to be part of. Yes, they’ve involved hurting our 95-year-old Queen (for which many here will never forgive you) and Prince Charles.

You and Harry even branded his family racists, which was a pretty low blow when you know they can’t hit back. But I suspect you really believe they are, and Harry has formed his opinions by looking at them through the prism of your eyes.

It’s sad, Meghan, that you’ve never really seemed to understand the value of family, estranged as you are from yours, apart from your mother, Doria. I’m guessing you never thought they were quite good enough, shiny enough, classy enough to accompany you on your glittering journey to Global Superstar.

In fact, they WERE a bit of an embarrassment, weren’t they? The blabbermouth half-sister who couldn’t stop talking to the press, the half-brother who was charged with putting a gun to his girlfriend’s head.

Even your poor mother was forced to file for bankruptcy after running up nearly $50,000 on her credit cards.

Maybe the Markle history of boozing, dust-ups, and debts were embarrassments you didn’t want to be paraded in public when you were looking to land a prince.

But the way you cut off your elderly father, Thomas, was ugly and ruthless. He admittedly made mistakes when you first met Harry, but as an ailing pensioner in his 70s, he was easy prey for a voracious media desperate to know more about you.

This is a huge shame because the Royal Family opened its heart to you like no other royal girlfriend. You were welcomed and supported from the off. Protocols that had applied to others in your position were swept aside for you. Those who know the

Queen said she was determined to make you feel comfortable because she didn’t want what had happened to Diana to happen to anyone else.

So what if William advised Harry to take it slow with you! What brother wouldn’t tell a besotted younger sibling to approach a new romance with caution? Harry is the brother of our future king, so it’s doubly important he makes the right choice of wife – one that would understand the role she was taking on and, more importantly, the institution she was to serve. After all, it took William eight years to decide to marry Kate.

But that brotherly concern caused offence where clearly none was meant, leading to what now feels like an irreparable rift.

So what part did you play in that? Did you shrug it off as well-meant advice, or did you make it clear to Harry that you were upset and offended, encouraging him to hit back on your behalf?

This was never about William disliking you or feeling you weren’t right for Harry. It was about him trying to take care of the younger brother who had struggled with his mental health over the years.

He was 12 when he suddenly lost his mother, and he had served on the frontline in Afghanistan, where he saw comrades killed and horribly maimed. He was fragile and Wills knew that. What he did was simply about protecting him.

As such a devoted campaigner for mental health, I’d have thought you’d have understood that. And what WAS the rush?

Why would it have been so bad for you and Harry to take it slowly? Because you must surely now see that Harry isn’t the man you first met. This estrangement from his family has changed him. He looks morose, angry and bitter and seems consumed by the belief that his family are bad people who hate you.

That isn’t true, Meghan, and you know it. William and Charles are not bad people. Along with Harry, they got through some of the hardest times of their lives together. They bonded. They had fun. They were often pictured laughing in each other’s company.

But these days we rarely see Harry laugh.

So I hope he laughs with you – truly I do.

Because his public face is now sour and unforgiving. Even his oldest friends say he never answers their emails and they fear for him.

Do you really think that’s helping him, Meghan, to be cut off from all his family and friends? Do you think that’s what Diana, the woman you idolised and who adored Harry, would have wanted?

I’m pretty sure had she been alive she would never have let this happen. She’d have made the importance of family clear to him and to you, Meghan.

And bearing in mind what happened to her marriage, she’d have wanted Harry to have somewhere to go if your relationship didn’t work out.

Instead, he walked away with you – and FOR you – and now there’s no going back.

Abandoning your family was clearly something you were able to cope with. And I suspect it actually suits you.

If it’s true you’ve set your sights on being US president one day, you wouldn’t want the Markle mob embarrassing you.

But I can’t help remembering that gloriously sunny May day at St George’s Chapel in Windsor when you became the Duchess of Sussex.

How, I wondered, can a 37-year-old woman have just one family member at her wedding?

The pews were packed with Hollywood stars you barely knew, but your mother was the only relative you invited. That told us everything we needed to know about the importance you place on family’.

But Harry’s family was there to support him. And my worry is that he isn’t going to cope long term without them. He’s in a new country trying to forge a new career, which until now has consisted mainly of bad-mouthing people who welcomed you, ‘Wouldn’t house you, provided you with staff and paid your bills. – celebrity

8 Signs of a Unhealthy Relationship