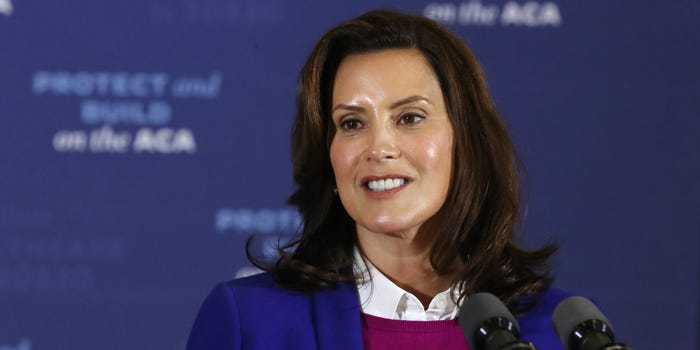 Not even the smallest children are safe from Governor Gretchen Whitmer’s authoritarian impulses. The Michigan Democrat has now issued a decree calling for youngsters that are only two years old to be forced to wear masks while in daycare.

On Monday, the new orders went into effect that all children from the ages of 2-4 must have their breathing impeded by the humiliating face coverings, which have become a powerful symbol of control for the Democratic party. They continue to exploit the COVID crisis in order to accrue sweeping new powers, and in Whitmer’s case those powers have been exercised with the cruelty of a dictator.

According to Michigan Department of Health and Human Services Public Information Officer Bob Wheaton: “The change means that kids from 2-4 are now subject to the masking requirement just like everyone else,” he wrote in an email statement. “So if an 18-year-old would be required to mask because they were in a gathering at a park, so would a 2-4-year-old.”

The punitive measure against Michigan’s youngest residents comes as the Wolverine State is experiencing a major spike in virus cases. Apparently the virus doesn’t care about Whitmer’s lockdowns and restrictions, which have clearly failed despite being among the harshest in the nation.

The masking order drew criticism from both parents and daycare owners/operators.

According to mid-Michigan television station MSMH NBC 25: “Nicole Bellanger works at Lady Di Daycare and Preschool in Vienna Township. Bellanger says children who are 2-years-old are learning from facial expressions and when they can’t see those expressions it can confuse them. Something might be super exciting and fun but they can’t see that so they don’t know how to react,” the station reported.

Bellanger added; “The mask will definitely put an impact on that. So we won’t be able to know what they say or what they want so that will make more behavioral issues because they can’t talk. So kind of like how babies cry because they have no other way of communicating now these 2-year-olds are going to have that same thing, so they’ll stop talking as much,” she said.

West Michigan CBS station WWMT quotes Juanita Castillo-Rowan who owns the Small Folks Development Center in Lansing; “That will be difficult. Very, very difficult and very challenging for these little ones to wear the masks.”

Pay To Sway? Here’s How Detroit Is Pushing The Vaccine On Teachers