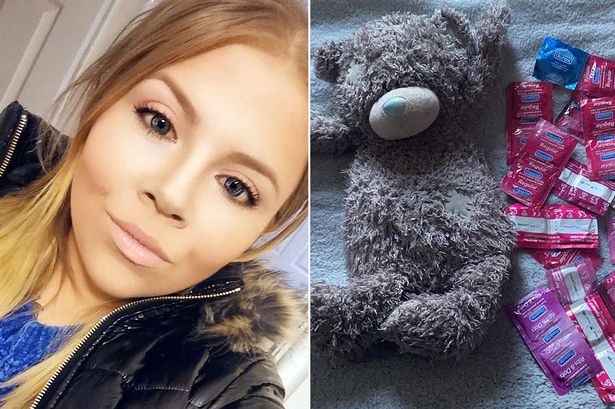 A spinster who was spending their Xmas holidays with their family just caught by her own mother red-handedly. She was got embarrassed when her mother found a giant wad of condom that she would hide from her back in her teen years.

25-year-old Lucy Lomas just hid around 50 of the contraceptives in her teddy bear along with hot water bottle. She also confesses that she had managed to keep them a secret for almost a decade. All her ambitions were dashed to the ground when her mother came across the gigantic stash when she was clearing out the family home’s attic earlier this week.

Understandably, the Blackpool-based sales consultant was gobsmacked when her mum sent her a message on WhatsApp after finding the latex-filled teddy bear, but couldn’t help but laugh at the situation, according to Daily Star.

She decided to upload the hilarious text exchange on her Facebook account, which has since attracted plenty of comments and gone viral. Alongside a photo of the condoms and the hot water bottle, she wrote: “Just thought I’d share this because I think its hilarious.

Lucy explained her side of the story, saying: “I was completely gobsmacked when she found them.

“I have always been very open with my mum so I knew she would’ve found the funny side.

“But I had forgotten they were ever there so I was probably just as surprised as my mum.”

She added: “She was clearing out the attic and I had put loads of old stuff in there when I moved out, at least I was being safe!”

Explaining the excessive amount of contraceptives kept in the teddy bear, Lucy said: “I collected them all from visiting the Buzz Bus and they’d give us bags of them each time, obviously I never needed so many.”

Her mum was understanding of the whole situation, and Lucy said: “I think she was just happy I was being cautious and prepared. Luckily, she’s very understanding.

“I think it was the shock of where I was hiding them and how long it’s been since they were stashed in the hot water bottle, to then finding them 10 years later.”