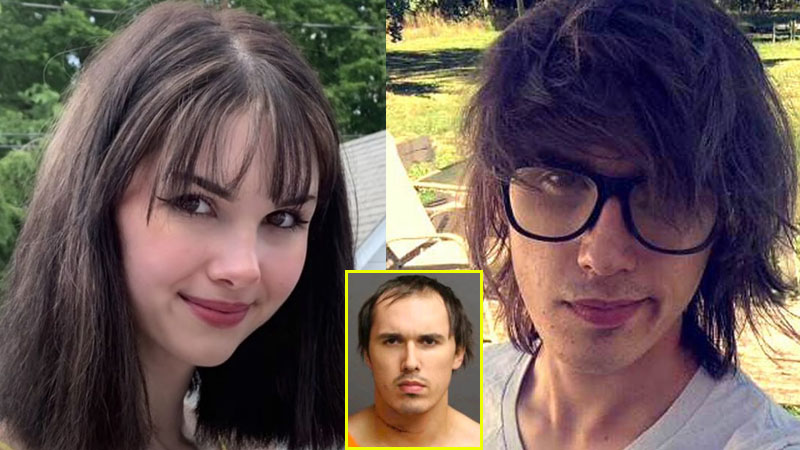 The internet can be a place of sanctuary for young people who are struggling to find their place in the real world. Whether using social media or messenger apps, teenagers can connect and seek out the like-minded people they lack the company of in everyday life.

After battling anxiety and depression, Bianca Devins, 17, turned to the online community and found a place where she felt accepted. As well as chat rooms, she used TikTok and had an Instagram account, where she would talk about popular video games and emo fashion.

Bianca lived with her mum and younger sister in Utica, New York, and had just graduated from high school. Having overcome her own troubles, she was about to go to college to study psychology so she could learn how to help others.

By 2019, Bianca was in a good place with her mental health and was becoming popular online, building up a small audience. She would happily chat to followers – and that was how she met Brandon Clark.

The 21-year-old messaged her that April and they struck up a friendship. Clark, who came from a broken home and ended up in foster care, had also struggled to fit in and found like-minded people online.

They met in person and he went to Bianca’s high school graduation party. People commented that he was very well-mannered but while Bianca only saw him as a friend, it was clear that Clark wanted more.

He was searching her social media constantly, saving her photos, sending her lots of messages and also taking screenshots of all the chats they had. Clark had a habit of getting fixated on things, whether it was Pokémon or the latest online game – and it looked like Bianca was his new obsession.

Even though she wasn’t interested, he told people she was his girlfriend – and maybe he thought that would be the case eventually, if he could just win her affections.

On 14 July, Clark and Bianca travelled to Queens, New York, to a gig by Canadian singer Nicole Dollanganger. But Bianca had arranged to meet someone else there – a guy called Alex. And during the event, Clark saw them kissing.

After the gig, Clark was driving Bianca home when she fell asleep in the car.

The next morning, the police started to get calls reporting that there were grisly pictures of a dead body going viral online, as they were being shared over and over – accompanied by messages such as, “Sorry, Bianca.”

There were also 911 calls from Clark’s family saying he had made some disturbing claims – then a call from Clark himself.

“My name is Brandon,” he said. “The victim is Bianca Michelle Devins. I’m not going to stay on the phone for long, because I still need to do the suicide part of the murder-suicide.”

Officers rushed to a dead-end road in woodland in Utica, where they found Clark and his SUV. Bianca’s body was lying under some green tarpaulin and Clark flung himself next to her, taking a selfie before cutting his throat with a knife. He was rushed to hospital, where he survived his injuries.

Disturbingly, police discovered video footage of Bianca’s murder that had been recorded on Clark’s phone. He had parked his car, woken Bianca up and confronted her about kissing Alex at the gig.

Bianca pointed out that they were just friends and Clark hit her. Shocked and angry, she demanded he drive her home – and threatened to get out and walk. Clark then pulled out a knife and slit her throat.

After taking pictures, he uploaded them to messenger app Discord, where they were actively shared across the internet. It was sickening and there was a race to get them taken down, as Bianca’s devastated family started seeing them too.

Clark was charged with second-degree murder, as investigators were convinced the killing had been premeditated. The knife had already been in his car, as well as ropes and tools. Clark had also searched on the internet about how to find the carotid artery, how to incapacitate someone and information on choking and hanging. But his mother said they were plans to harm himself – not Bianca.

After Bianca’s death, the internet was wild with rumours about her. Some said Clark was a stalker who had tracked her to the concert, while others said he was a huge online star.

In the wake of her killing, Bianca’s Instagram account had more than 150,000 followers – but that was because of the macabre fame her death brought about.

The falsehoods being peddled caused her family further distress. Social media owners were criticised for their slow response in taking down the images – and months later they could still be found. Some vile trolls even used the images to joke about Bianca’s death.

Those who loved Bianca held vigils and her friends from school were offered counselling. Her death also forced people to start having some difficult conversations about the dangers of online sharing – and the lack of restrictions that had allowed Bianca’s family to
have access to the upsetting images of her body.

At first, Clark pleaded not guilty – then, in February 2020, he changed his plea to guilty. His lawyers claimed he didn’t want to put Bianca’s family through the trauma of seeing the 10-minute killing video, which everyone now knew had been found on his mobile.

But it was more likely that Clark knew the video was so damning it could increase any sentence made via a plea deal.

Bianca’s family expressed their relief but were again distressed when he tried to withdraw the plea – claiming his legal team had misled him. The request was denied.

Finally, in March this year, after delays due to the pandemic, Clark faced sentencing.

Making a statement in court, he said, “I think I need to realise what I did I can’t undo, as much as I want to. I apologise to all the people that knew and loved her. I apologise to everybody affected by this, to everybody who had to see that horrific picture of her. I know sorry is not enough, and it won’t take back what I did. I wish I had more to give.”

They were empty words for Bianca’s loved ones. Clark had shown no compassion as he’d filmed her final breaths. The judge even interrupted Clark to note that he’d tried to withdraw his guilty plea.

‘There is going to be a war’: Republicans ‘bracing for a nasty fight’ with Trump in scramble for donor dollars