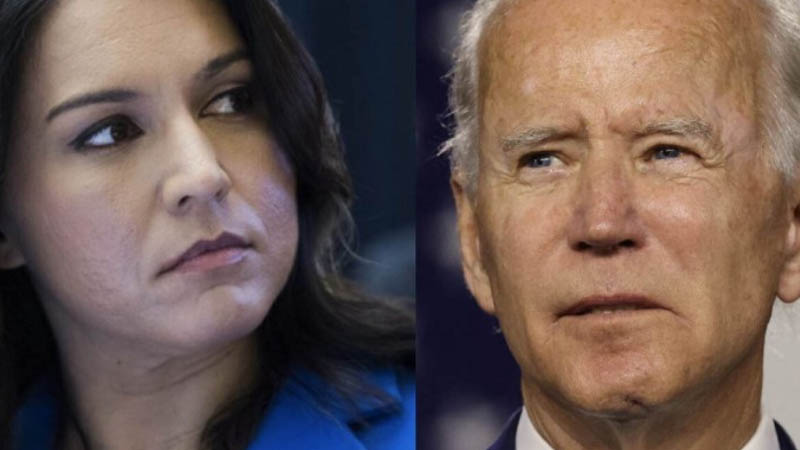 It’s official, Tulsi Gabbard is the only remaining sane Democrat left in the world.

She should just become a Republican and call it a day.

Tulsi isn’t afraid to call out her party for their radical ways – especially when it comes to “cancel culture” and foreign policy.

And if Joe thinks Tulsi will shut up and go away, he’s got another thing coming. She’s back with her most dire warning yet…will he listen? Probably not.

But a girl’s gotta try.

Tulsi is NOT a warmonger – she’s the farthest thing from that. As a vet, she understands the importance of peace and not going to war simply to line the pockets of the defense contractors, as both the left and the right have done so many times in the past.

And that’s exactly what Tulsi is once again worried about with Biden and Russia as we begin the slow slide into a conflict situation with Russia.

Tulsi has a warning for Joe Biden – she says that he must deescalate the tensions that are growing between the US and Russia before things get completely out of hand and we find ourselves at war with a major world superpower.

The left has used Russia for the past 5 years, painting them as the big bad “boogie man” who was taking over the US through President Trump.

We on the right always knew that was fake news, and it’s been proven now, but the mindless drones on the left don’t know that.

These low-info zombies still think Putin was the “real president” for 4 years.

It’s really scary how easily duped a huge section of the population can be thanks to propaganda news.

So, Biden knows that he could sell a “war” with Russia to his dopey and fearful base with little effort.

After all, Biden has to repay the American War Complex somehow – after all, they helped install him into office, and “war” is big money.