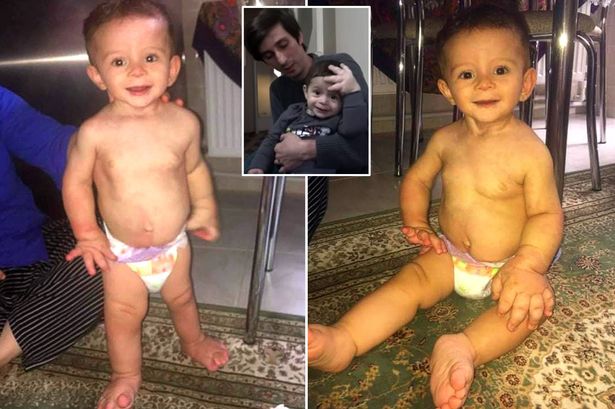 The parents of a little tot who has one hand and foot growing at twice the rate of the rest of him are desperately appealing for help.

Mahmut Efe Tiryaki, who is just 18-months-old, has been born with a rare and incurable condition that means one half of his body is growing much faster than the other.

The little toddler has one giant hand and one giant foot, but the other side of him is the expected sized.

Worried mum Nurgul Tiryaki, 21, along with dad Sinan Tiryaki, 27, says they are desperate to help but are hampered by a lack of money.

They fear the unusual condition could lead to something even worse in the future.

Nurgul said: “I do not want to lose him before I see him walking and running around.

And his dad added: “I work for a minimum wage and my financial means do not allow me to cover the costs of the treatment. We are hoping the state will provide assistance.”

The family, who live in the Turkish city of Bursa, have been told that little Efe has Klippel-Trenaunay syndrome.

It is a rare congenital medical condition in which vessels failed to form properly, resulting in localised gigantism, usually around the legs.

However, in Efe’s case it also involves his hand, with both his hand and his foot as big as if they were on a 10-year-old child.

His other hand and foot are normal-sized.

There is no cure, but it can be manageable with one of a number of treatments which vary from patient to patient.

However, his parents lack the financial resources to undergo any of these treatments, which means the boys hand and foot are continuing to grow.

The family are desperately trying to raise TRY 300,000 — roughly £30,392 — for the treatment, which they say needs to be carried out at a private hospital in Istanbul.

But she added: “We simply do not have the financial resources.”