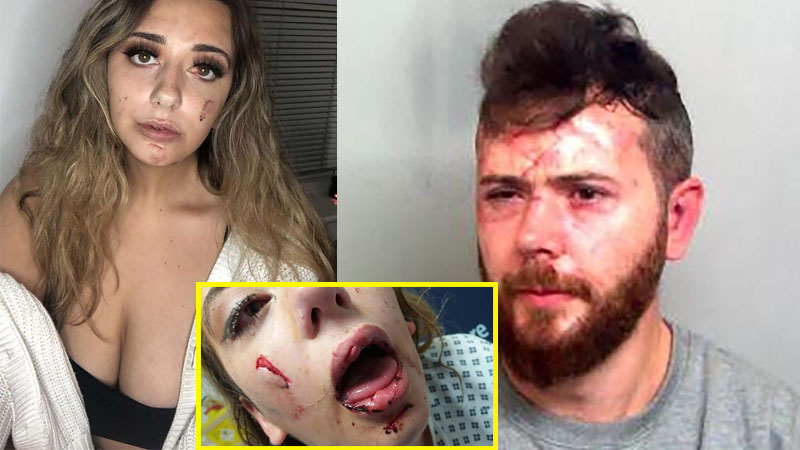 A disabled young woman was almost killed after a thug smashed a pint glass in her face for trying to protect pub staff, a court was told.

Lucy Nobile, 20, was “scarred for life” when an eight-inch piece of glass tore into her neck – just 5mm from her carotid artery.

The community volunteer, who has the rare genetic eye condition Stargardt disease, which can lead to severe loss of vision, also suffered deep cuts to her lip, chin and cheek, and popped blood vessels in her eye during the attack.

James Booth, 29, admitted downing seven pints and two shots at the Hole in the Wall in Colchester, Essex, before launching into the unprovoked assault.

Ipswich Crown Court heard how the attack had left Lucy “fearful of making contact with people at all”.

Speaking outside court, Lucy said: “I was just chatting to a friend of mine and the next minute I had glass hanging out of my face.

“He hit me with a glass but made sure he tipped it upside down so the heavy end connected. At first I didn’t know what was going on because of the adrenaline.

“It was only when I touched my face and I couldn’t reach my skin because of all the shards of glass that I knew something was wrong.

“After that I can’t remember much as I passed out due to blood loss and concussed myself by hitting my head off the floor.

“I had the length of the Fosters glass in my neck – it went in four inches.”

She added: “At first [the attack] left me with such hatred and anger towards the world, it was so hard to even comprehend as it happened in my hometown, in my local pub, where I drank.

“It was such a surprise, I’ve never met this man before in my life. It was awful as it wasn’t just traumatic to me, someone managed to get hold of my dad and he came to the scene and saw an eight-inch shard of glass hanging out of my neck and blood spurting in the air.

“It was just so out of the blue, looking at pictures of it I can’t believe it. One day I was normal and now this.”

The court was told how the attack occurred after Lucy had asked Booth to stop harassing an employee at the pub.

Booth responded by making a lewd sexual slur before attacking her with the glass. He tried to flee the scene, but customers restrained him until he was arrested by police.

Booth was jailed for six years after pleading guilty to GBH with intent.

“He is very sorry for his actions, very remorseful. You will see he’s not violent, the offence was and is a one-off incident.,” she told the court.

However Recorder William Clegg QC said the “dreadful” attack on a “‘wholly innocent lady” was unacceptable.

Sentencing Booth, he said: “You scarred her for life, picking up a glass and forcing it into her face with such force that it shattered.”

Khloe Kardashian blames Kris Jenner for urging her to get back together with Tristan Thompson: Rumor