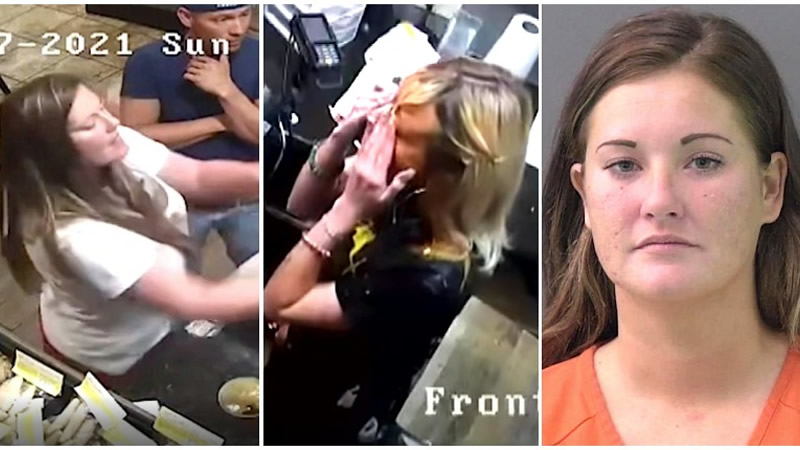 A Texas woman accused of throwing soup at a restaurant worker has been arrested, authorities said.

“We do not condone this type of behavior and hold our citizens to the highest standard,” Deputy Police Chief Allen Teston told KCEN-TV. “If a citizen believes they have received poor service we advise them to remain civil until the problem is resolved.”

Video from the Sol De Jalisco restaurant in Temple went viral on social media, according to the television station. The incident occurred at about 1:30 p.m. CST on Nov. 7.

Police said Martinez called the restaurant that day to complain about the soup she ordered, according to KCEN. The woman spoke with Jannelle Broland, who later posted two videos on TikTok and claimed Martinez was cursing at her over the phone and when she returned to the restaurant.

In the TikTok videos, Broland said she offered to give the customer a refund, but the woman continued to curse and argue with the employee. According to police, Martinez complained that the soup was so hot that it melted the plastic lid of its container.

In the TikTok videos, Broland said she offered to give the customer a refund, but Martinez continued to curse and argue with the employee.

According to the video, Martinez threw the container of soup in Broland’s face and left, KCEN reported.

“My first thought was, ‘What just happened, why, like why is this happening?’ and I realized I couldn’t open my eyes and I wiped away and I realized I was like, ‘Wow, she really just she threw that at me,’” Broland told the television station. “She really threw that right at me.”

Assault causing bodily injury is a Class A misdemeanor punishable by up to a year in jail and a fine of up to $4,000, according to KXXV.

Martinez’s bail has been set at $5,000, according to online booking records.

The GOP Trump Haters Are Finally Realizing What a Horrible Mistake They Made on Nov. 3