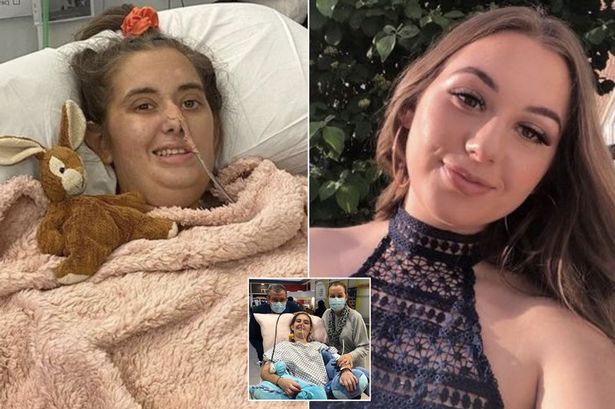 A 20-year-old student who flew off the road and crashed her Citroen C1 into a ditch on the M2 motorway was given just a 2% survival rate.

Macy Window was travelling back home to Corringham, Essex from the University of Kent to celebrate her dad’s birthday when disaster struck.

She was due to meet her boyfriend halfway but during a downpour of rain, she lost control of her car and skidded off the M2, hitting a tree on the embankment.

Her attentive boyfriend noticed something was wrong and alerted emergency services after he realised her car hadn’t moved on the iPhone’s location service, reports Essex Live.

It took six hours for firefighters to remove her from her car before she was airlifted to Kings College Hospital in London and underwent life-saving surgery to stop heavy bleeding.

Macy was then put into an induced coma and doctors told her family her chances of survival were just 2%.

The 20-year-old was prematurely woken up after six weeks as she suffered a series of strokes on her brain.

Six months on, Macy is alive, but she has lost the ability to walk, write, move her arms and will need intensive rehabilitation to improve her health condition, forcing her to fundraise for costly rehabilitation.

She told EssexLive: “I was meant to meet my boyfriend at the services, and apparently I gave him my location so he could see where I was.

“He noticed that my car hadn’t moved in 15 minutes and he knew that there was no traffic on the road, so he started to worry and tried to call me but there was no answer.

“The police just deemed it as inexperience of driving in that weather.”

After she came out of her coma, Macy was allowed a speaking valve on for 15 minutes a day, where she was able to take swabs of water and say one word at a time.

She regained her speech after five weeks of the insertion of the speaking valve and within two months, her speaking valve was removed, meaning she was finally able to talk freely and eat a normal diet.

Macy said she is taking her time as she is in “so much pain” and on a “constant infusion of ketamine and morphine”.

The student said: “I had a few strokes on my brain, so basically I can’t move any of my arms or upper limbs and I can’t move my legs, I can’t feel my right leg.

“I am slowly, slowly, slowly, starting to be able to really engage with videos, because I am in so much pain, and I am on a constant infusion of ketamine and morphine to deal with my pain.

“It just takes time and seeing what I can actually get back and what I don’t get back, and if I can walk again if I’m in a wheelchair and if I can use my arms again. It’s like a huge question mark.”

Macy’s accident and recovery have taken place during the Covid pandemic but her family and friends have still managed to be with her every step of the way.

She said: “It has been pretty hard because visitation hours have to be cut down

“I feel like my friends and my family have all become one huge unit – all united and for a period of time, everything was shared between that bubble of people.

“The connection I have with my sister, my brother, my mum and my dad, my amazing, amazing dad. I feel like we maybe were guilty of taking each other for granted before.”

Her family has since started a crowdfunding campaign to help fund Macy’s future rehabilitation and access to facilities which would increase her chances of a full recovery.

Macy said: “I put my Just Giving page up, which took a lot to do.

“For me, it was really hard, I was really nervous and to be honest I said to Hattie, my sister, to put the target of £1000, but I was so worried no one was going to donate.

“I was actually overwhelmed and I can’t thank everyone enough, for even sharing my page or donating, doing whatever they can.”

She went on: “I actually feel such a strong sense of community on social media recently and I have been able to use social media as a support system.”

When Activists Try to Cancel Barack Obama, You Know ‘Wokeness’ Is Out of Control