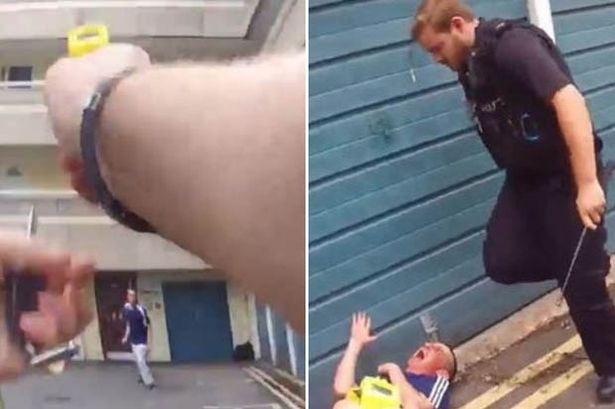 Shocking footage shows a police officer Taser a knife-wielding man who was threatening to stab his wife and police.

Body-worn camera video of the moment PC Chris Wright discharged his Taser at David Wilkie, outside a block of flats in Staple Hill, Bristol Live reports.

In the clip, recorded on June 16 last year, the officer tells other cops to get into the safety of their cars.

“He says he going to stab us, can you get firearms here please guys?” he says.

Wilkie then runs out of a flat armed with three knives and starts advancing towards the officer who lifts up the Taser.

“No, no,” he says, before discharging it towards Wilkie who crumples on the ground screaming.

Another officer then quickly kicks the knives away and Wilkie is handcuffed.

Bristol Crown Court later heard that Wilkie, 41, had assaulted his wife and threatened her, and was going around the walkway of the block of flats with several long knives in his hand.

On the day in question, he pawned her phone to pay off a drug debt before coming home appearing to have been drinking and turning violent.

The court heard after threatening to cut himself he threw his partner to the floor and against a wall and grabbed a knife.

When he heard her call a friend, asking the friend to call the police, he stabbed the knife into a table and smashed a mug.

He then said: “They’re going to have to use brutal force to get me out of here.”

Judge Martin Picton jailed Wilkie for 12 months, telling him: “You were seriously out of control.

“You lost all self-control.

“You were violent to your partner, police were alerted and you were aggressive towards them and caused them to fear violence as you approached them with a knife.

“Brandishing of knives towards police is a very serious offence and it calls for serious punishment.”

Catherine Spedding, defending via video link due to coronavirus pandemic, said: “He was not taking his medication at the relevant time.

“It was affecting the physical relationship with him and his wife.

“He has little recollection of what happened.

“He’s extremely sorry and upset regarding the hurt and upset to his wife and attending officers.”

SHOCKING: Teen Who Sold His Kidney For iPhone Is Now Bedridden For Life