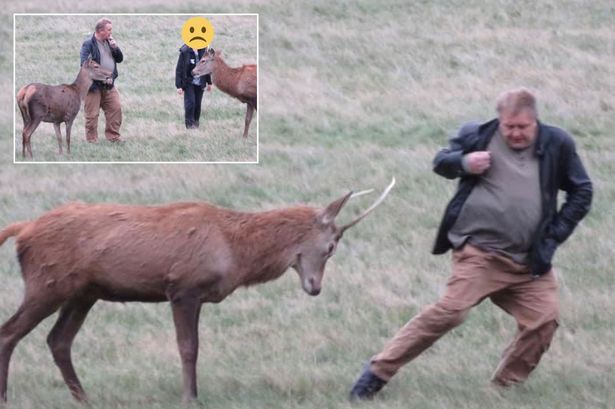 Warnings have been issued after a stag was pictured charging at a man with its antlers after he got too close.

Crowds of visitors to Richmond Park in southwest London were also seen chucking seeds at the creatures – despite strict rules not to feed them.

The behaviour was slammed by park chiefs who urged them to stay 50metres away from the wild deer.

Photos posted by visitor Charlotte Wilden showed groups of children getting close to the wildlife to feed them while adults also got too near.

She tweeted: “My friend took these pics on a long zoom lens today.

“People feeding the deer from their hands, then throwing food at the deer when the deer decided they’d had enough.

“So horrible to endanger the children in this way.”

In one shot, a man was seen darting off quickly as a stag lowered its head with its antlers out to run at him.

Royal Parks, which is responsible for the popular tourist spot, blasted the behaviour, the Sun reports.

The charity tweeted: “Once again, we condemn this sort of behaviour in the strongest possible terms – when visiting the Parks with native wildlife, please refrain from approaching closer than 50 metres.

“In addition, feeding the deer does them harm, not good.”

One social media user tweeted: “They wouldn’t be endangered if the muppets left the animals alone.”

The deer are in their breeding season, which runs from October to November, and leaves them pumped with testosterone and adrenaline.

While they face down other rival deer, it means if they are provoked they can attack humans.