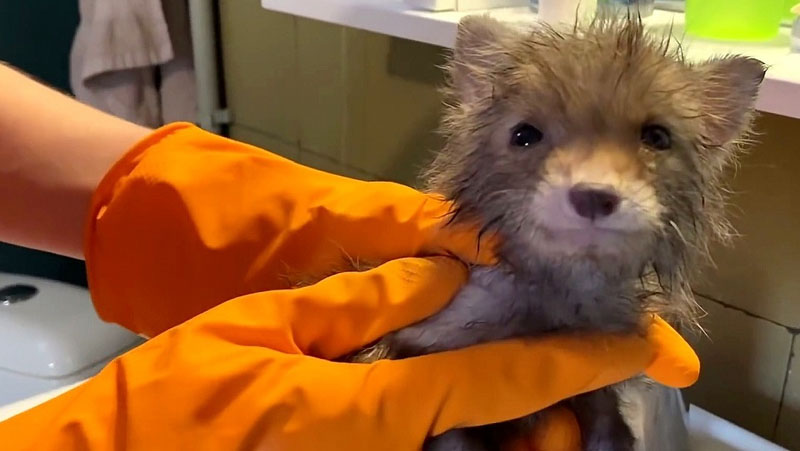 A young motherless baby fox was at the end of his rope when he found himself imprisoned in a small ditch. The ditch was probably dug out by hunters to trap small and innocent animals passing by. This poor fox cub was completely wedged between the branches piled up on the soil, and was wiggling his body feebly in a desperate bid to escape.

The baby fox was left suffering all alone as his distress cries went unheard in the isolated forest. Just as he prepared himself for a dreadful fate, he heard footsteps approaching on the crumpled dry leaves. A man casually strolling by the woods had followed his cries from afar and come all the way to save him!

The man turned out to be an animal rescuer with experience in rescuing dogs and cats. He cautiously scooped the baby fox out of the ditch and secured him in his warm jumper. The wee creature was all grateful as he rested in his savior’s arms like a tiny little toddler! The man took the starving and dehydrated baby fox home and offered him food and water.

The man then bathed the baby fox and cleaned off the multiple parasites colonizing all over his body. With time, the man sought help from other wildlife rescuers to raise the baby fox. It was a comforting experience for the sweet baby as he began growing up receiving the best care and company! He even developed a special fondness for his rescuer’s fluffy dog and looked forward to hanging out with him!

However, it was the baby fox’s devotion and emotional attachment to the person who saved him that truly mystified everyone! The furry cutie was fiercely loyal to him and followed him around with doting eyes all day. He clearly sees the man as the guardian angel who helped him survive and thrive despite all odds. What a pure and precious bond between a wild animal and a human!

Click the video below to watch the rescue of the baby fox and his unflinching devotion to his rescuer!

Pay To Sway? Here’s How Detroit Is Pushing The Vaccine On Teachers