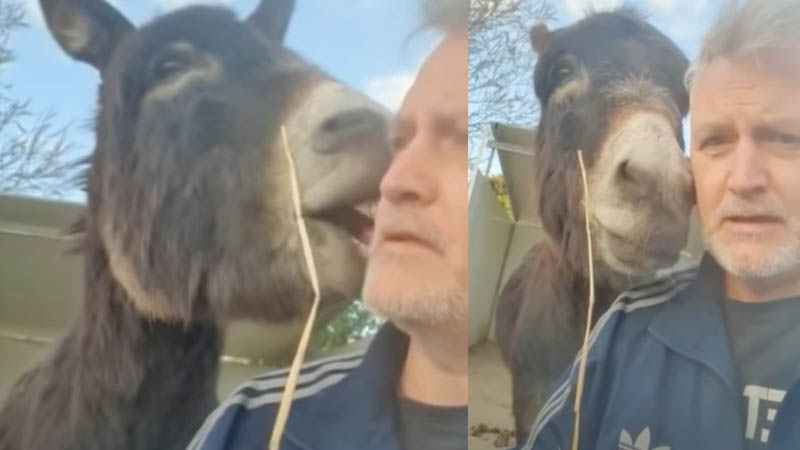 The owner of Steve was really concerned as someone keeps breaking into Steve’s feed shed. He wanted to keep an eye so that he figures out who keeps going into the feed shed and steal food. Animal owners are on the guard these days after daily reporting of dognapping and properties being broken into, so the donkey dad had every right to be concerned about Steve’s feed shed. In fact, he came out and asked Steve if he saw anything.

“It seems to happen a lot when you are let out of the run,” the donkey’s owner shares. “Now I’m not saying it’s you, but I’m saying there seems to be a correlation between when you’re free and when the break-ins happen to the feeds shed.” As the man muses over the feed shed caper, suddenly Steve goes in for a cuddle with his dad. Perhaps he is guilty of the crime or maybe the darling donkey is trying to get in his owner’s good graces.

Steve’s dad muses not to give him those eyes, as “it’s very hard for me to tell you these things” as he saw him with sad eyes. Listening to that, Steve removes his chin from the man’s shoulder. More evidence comes out as the man reveals one of the feed sacks had teeth marks in it. In the meantime, Steve chews away on some straws without a care in the world.

When the man finally got to know that Steve the donkey was the guilty culprit and he is most definitely helping himself to food in the shed, he is hysterical and understands that the donkey will butter him up.

The closer the man walks towards the feed shed, the more Steve moves closer and closer until he plants some wet kisses all over him.

Get Rid of Skunk Smell on Dog