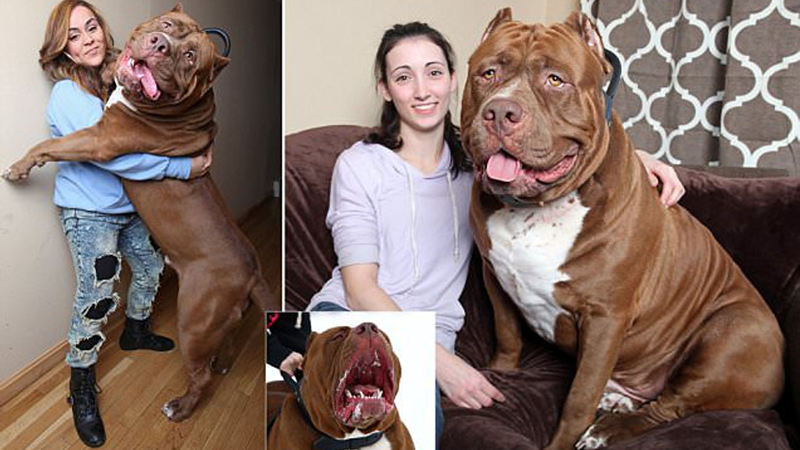 Proud owners of the world’s biggest pit bull dog have told how their three-year-old child rides the 175lb pooch like a horse. Marlon and Lisa Grennan from New Hampshire say their monster pet ‘the Hulk’ is 100 per cent trusted with their son, Jordan, despite the breed’s fierce reputation.

Indeed, photographs show the toddler happily riding on the canine’s back, grabbing the collar just behind its 28-inch wide head.   While pit bulls are branded ‘dangerous’ with breeding bans enforced in the UK, Mr Grennan claims they are actually very caring and fit for the family. ‘These dogs are very balanced and gentle – they are nanny dogs,’ he said.

‘I don’t think it’s irresponsible for people to have pit bulls and children. They’re dogs just like any other dog. ‘No matter what the breed it is, it is hundred per cent how you raise them.’ However, Mr Grennan acknowledges that a dog the size of the Hulk ‘could kill someone if it was in the wrong situation at the wrong time’ and ‘snap an arm like a toothpick.’

The Grennan’s dog is almost three-times bigger than a normal American pit bull terrier.He is also still a puppy meaning he could grow even bigger.

Each day he is fed a protein-rich diet consisting of supplements and 4lbs of ground beef. The Grennans believe the bigger the dog, the better.

Together they run Dark Dynasty K9s, which specialists in breeding some of the world’s most fearsome guard dogs. Marlon, a former boxer, formed the company ten years ago with just two dogs, after suffering a hand injury which ended his career.

They now own more scores of dogs, many who live in the house with the family on a sprawling 150-acre ranch. These include more than more than a dozen highly trained pit bulls – and a single chihuahua. And while he admits his dogs are trained for aggression and power, he says the criticism is usually from people who lives in safer environments with no need for protection.

He added: ‘It’s very, very, important what I’m doing. ‘I live in New Hampshire where there’s no crime and I don’t have to worry about that kind of stuff.

They don’t live in Candyland, they live in fear. ‘And why should somebody else live in fear if they don’t have to. So that’s my job, to try to alleviate somebody else’s fear by giving them a family dog too.’ -dailymail

How Does Yoga Help Reduce Stress

Kelly Clarkson Doesn’t Mind If Her Daughter Is Gay