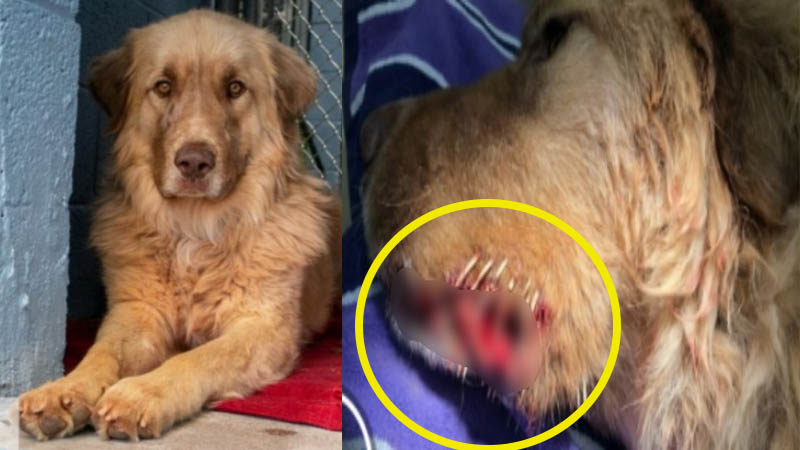 Family members of a woman from northern Arizona were able to find homes for her 65 Schnauzers after she passed away. However, eight others were unable to be placed into their forever homes.

Spike, one of the eight dogs, was a Great Pyrenees who was afraid of people as he had no socialization skills. However, Spike amazed everyone, however, and is being called a “hero dog” for his bravery in the face of danger.

As the rescuers arrived, they discovered that one of the Schnauzers has given birth to a litter of puppies and they are located outside in the desert. The surprising part is that Spike, the Great Pyrenees was closely guarding the little ones as if they were his own.

When the rescuers went close to the puppies, they noticed something was stuck to Spike’s face. On examining closely, they realized that he had a face full of porcupine quills, which he likely received while protecting the puppies.

The AAWL team of rescuers removed Spike and the pups from the property and shifted the to AAWL’s main Phoenix campus. On arrival, the puppies were given bottle feedings while Spike went into surgery to have the quills removed.

Some quills were left as they were so deeply embedded into his skin. He was placed on antibiotics which helped push the remaining quills to the surface so he could have a second surgery.

The puppies are currently being bottle-fed every three hours by an AAWL employee and her children. Some of the schnauzers have been adopted, others are up for adoption, and AAWL’s behavior team is working with others to help them become more social.

As for our hero dog? Spike is recovering very well and is making new friends. He will be up for adoption in a few weeks.