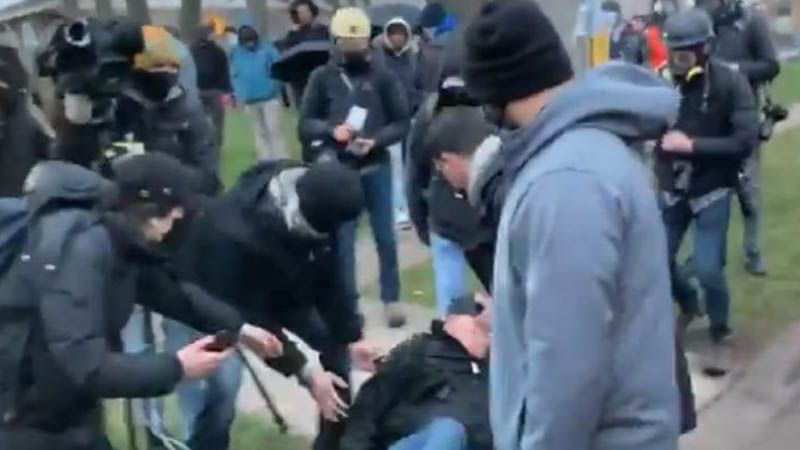 Things are heating up in Brooklyn Center, Minnesota again tonight, the third night after the police shooting of Daunte Wright.

CNN is there with Miguel Marquez and his crew. The BLM ‘protesters’ just attacked one of the crew members. They threw a water bottle, hitting the older gentleman square in the head and you can see him go down, visibly a little stunned. They then laugh at him and mock him, with a couple trying to see if he’s okay. He gets up and seems to want to take them on, but is held back.

The rioters then chased the crew out of the area, away from the police precinct, throwing things at them and raising their hands to them. “Get the f**k out of here,” the BLM folks yelled. The CNN crew quickly piles into their car and beats it out of there.

This is what they do to “friendly media,” trying to promote their side and their agenda.

So you would naturally think this would be covered by CNN, right? After all, it was happening to their own reporter and his crew? But it doesn’t serve the narrative to show it.

According to Will Chamberlain, although Don Lemon was covering what was going on in Brooklyn Center, this attack on their own crew didn’t come up.

As we’ve seen, yet again today, CNN is about pushing the Democratic agenda. If it doesn’t serve that, then it might as well have never happened, it will be disappeared away on their network.

Would that CNN would call it out. But they won’t, or they’ll excuse it as “mostly peaceful.”

CNN helped to create this monster and have stoked it for a year. It’s now out of control and coming back to bite them.