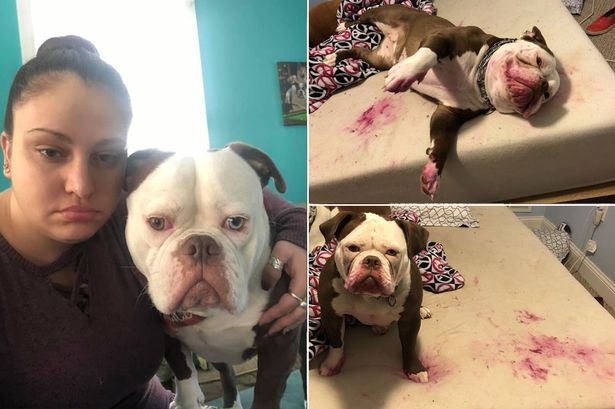 A dog owner was given the “fright of her life” after finding her dog on the floor, covered in what she thought was blood.

Upon closer inspection, Jordan Gilletti, an operations manager from Massachusetts, US, soon discovered that her dog wasn’t injured, but was instead ‘playing dead’ and had red lipstick all over her.

The Olde English Bulldogge, named Alice, had mischievously eaten one of Jordan’s lipsticks and decided to roll onto her back for a belly rub when she heard her owner approaching.

The 30-year-old, who is the proud owner of two bulldogs, Alice, four, and Edgar, five, says the pooch has a history of chewing objects and has previously eaten seven television remote controls.

Jordan said: “I had gone to bed but I think Alice must have snuck up behind me and I didn’t realise.

“We live in an old house, so the floorboard is a little bit uneven. So, I think she must have somehow knocked my dressing table and my lipstick then fell on the floor.

“As I was asleep in bed, with both dogs now in my room, I was woken up by a strange chomping noise.”

She got out of bed to turn the light on to see what the noise was.

After turning on the light, Jordan saw Alice laying on her back with red all over her.

“I initially saw Alice and got the fright of my life. At first, I thought she had blood all over her,” she explained.

“At that moment my heart completely sank as I thought something really serious had happened. Then I looked at Edgar, and he was chewing an empty lipstick container.

“That’s when I realised she had eaten my lipstick and was just waiting for a belly rub from me. I was so relieved.

“It looked like Alice had no regrets and was pretty pleased with herself. I was worried that she might become sick from eating it, but thankfully she was completely fine.”

The next day, Jordan was tasked with cleaning up her lipstick-loving pooch.

She added: “It was so hard to get the lipstick out of her fur, eventually it faded out.

“Although she ate my favourite lipstick, I am so glad that was the case and she wasn’t really covered in blood.

“She scared me to death.”