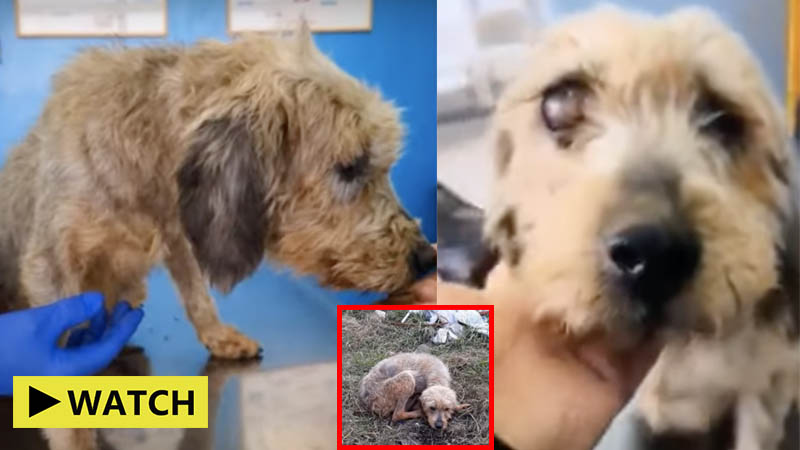 Our dogs are family. As they age, they deserve to be cherished, especially during their golden years. But one dog owner didn’t agree. When his dog aged and became blind in both eyes, he did the cruelest thing. He put her in his car, drove out to a field, and dumped her there.

The poor dog had no idea where she was. She was scared and confused. Blind dogs can do very well in a familiar environment but this was anything but that! She sniffed around piles of garbage trying to find someone to help her.

People had seen the dog and posted her photo online. Oddly, they did nothing else to help her. A woman saw the post and figured someone would have helped her immediately. But no one did. When she drove to the area a few days later, the dog was still there.

The poor girl was so confused and skinny. There was no time to waste. The woman walked up to the dog and gave her some much-deserved pets. She spoke to her and soothingly told her it would be okay now. It was obvious that the dog understood because she started to wag her tail.

The kind woman took her to the vet where they confirmed via microchip that she did have an owner. He just didn’t want her anymore. The dog was born blind in one eye but once she lost her sight in the other eye, the only owner she ever had given up on her completely. He didn’t even try to rehome her!

The vet was sad for the dog. She was so sweet and even wagged her tail during her exam. The vet was stunned by her upbeat attitude despite her poor health. The pressure behind one eye was extreme and she needed medication. She also had a bad ear infection.

Her rescuer then gave her a new name, Elsa. The woman decided to foster her. Elsa had to come back to the vet to be vaccinated and spayed a few days later. She did great! She then had a nice bath and was properly groomed. She looked beautiful!

Now all Elsa needed was a happy ending to her tragic story. Elsa’s rescuer did all she could to ensure that would happen! To see what happens next, watch Elsa’s story below. We are so happy she was saved in time.

She Left Her Healthy Dog For A Quick Errand, Came Home To His Stiff Body