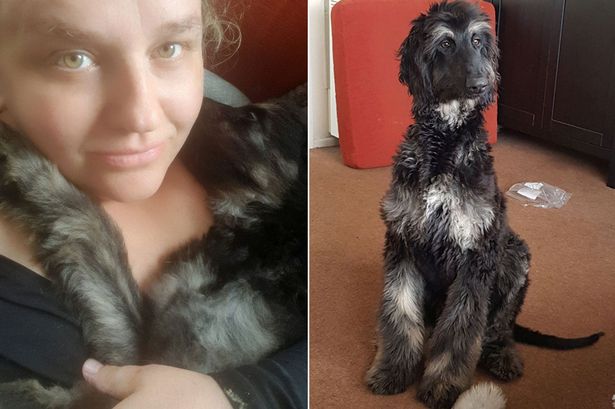 A starving, abandoned dog was found in such a horrific condition a chain collar was embedded in its neck.

Officers from Ottaway Bylaw Services delivered the dog in a critical condition to the Humane Society.

The Newfoundland mix, who has now been named Jake, was found wandering the rural roads of Dunrobin.

He was seen dragging a chain attached to a chain collar.

“The collar had cut into him and the skin had grown overtop, leaving two ends of chain dangling from each side of his neck,” said Dr. Shelley Hutchings, Chief Veterinarian at the Ottawa Humane Society.

“The area was heavily infected, and the hair coat around his neck was matted with discharge.”

Shortly after arriving at the shelter, Jake began vomiting.

The clinic team provided him with pain relief and sedated him to X-ray the area, chest and abdomen.

Dr Hutchings performed an emergency surgery to remove the collar and clear away clumps of tissue.

Following the operation, Jake was stitched back up with a drain in place to keep fluids from pooling in the surgery site.

It’s possible the pooch could have been on the run for some quite time.

In a statement on Thursday, the Humane Society said that given Jake’s emaciation, the state of the wound, corn found in his stomach and a “serious” hook worm infestation, it’s unclear how long he was alone.

“At this time, Jake’s outlook appears to be positive. OHS clinic staff closely monitor his progress and recovery as he stays in the OHS Critical Care Unit,” said the Ottawa Humane Society.

The case has been sent for investigation.

Earlier this week, a little puppy lost in the snow was found by soldiers who heard it crying for help.

The brown and white dog was chilled to the bone as soldiers picked the pooch up and transported it back to camp.

It’s believed to be the sole survivor after a litter was dumped in freezing conditions.

A little puppy lost in the snow was adopted by soldiers who heard its frightened cries for help.