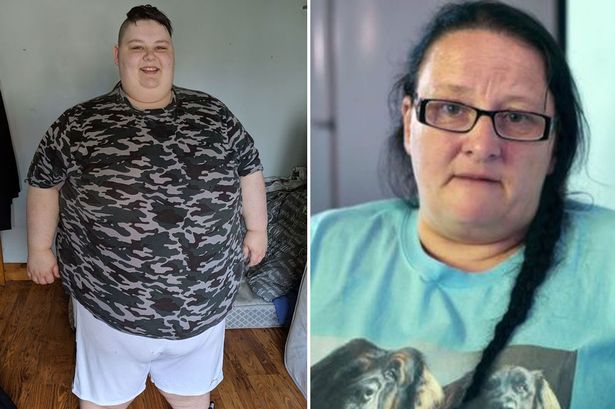 A young Brit has been told to lose weight if they want to survive gender reassignment surgery after hitting 41 stone.

AJ, who lives in Airdrie, spends 19 hours on a mattress in the living room every day eating up to 5,000 calories.

For the past six years they have been inside, the Daily Record reports.

AJ is showered by mum Sharon, who also cooks for them and sleeps in the same room as them.

The 24-year-old, who identifies as non-binary, is forced to sleep on a pile of pillows while using a special sleep mask because the excess weight compresses airways.

AJ has been warned their dream of going under the knife for gender surgery may prove fatal unless they lose weight.

Even the most basic of tasks require assistance from Sharon, who helps with trips to the toilet.

Sharon’s biggest fear is that AJ will stop breathing during the night, so she sleeps beside her child on another mattress.

AJ’s story is being told as part of a powerful Channel 4 documentary Shut-Ins: Britain’s Fattest People.

“My role at the moment is mother to a giant baby,” admits Sharon.

“It breaks your heart to see your child like this, it really does.”

Isolated at home, AJ relies on two dogs for company because “animals don’t judge”, having faced cruel taunts from bullies at school and even children on the street.

AJ, who is carrying four times as much weight as is recommended for someone their age and height, can eat up to 12 teacakes and drink six litres of cola a day.

“I know a lot of people would say you’re a mother it’s your fault,” Sharon said.

“Hands up yeah totally agree with you, partly it is my fault.”

Doctors are concerned AJ’s eating habits could see them dead in as little as five years time.

“The doctors are saying AJ is not going to be here in five or 10 years time the way you’re going on. That’s really frightening,” Sharon confessed.

AJ, who identifies as non-binary and uses “them” and “they” pronouns, has another strong reason for wanting to lose weight.

They dream of having a gender reassignment operation, but doctors warn they might die if they went under the knife.

“My body doesn’t reflect who I am because I still have the female attire,” AJ said.

“What I want now is a mastectomy and a hysterectomy. I want to be me, just me.”

Tipping the scales at 41 stone, any surgery on AJ is considered too dangerous.

Before they are going to go under the knife drastic changes in their lifestyle and diet are needed.

A BMI of 30 is considered obese, which means AJ is off the scale at a staggering 95.

Before doctors will agree to surgery, AJ has been told to see a psychologist to pinpoint where the years of overeating started.

It was around the age of 12, when AJ already weighed 12st, that they were targeted by bullies – with mum comforting with chocolate and cheat microwave meals.

Sharon explained: “Some of the lads at the time would think it was funny to kick the football against her head.

“I know as a parent, we should have said, no we’re not having the chocolate or crisps.

“But when your child is coming home so upset, a kiss and a cuddle will only go so far.”

He warned Sharon that her “controlling” behaviour might render weight loss surgery a waste of time.

The advice led the mum to rush from the appointment in floods of tears.

The doctor said: “That shopping and that food that allowed AJ to gain the weight of a whole person in less than a year, you contributed to.

“This operation could kill AJ if it went badly wrong. It’s a small risk.

“If AJ was my child I’d be thinking do I want them to go through that risk when it could be a waste of time anyway because of things that I’m doing.”

Professor Kerrigan later told the camera it was ‘really interesting’ to see how AJ had responded when someone was ‘really direct’ with the mum, adding: ‘I think AJ is up for this. Mum…. I’m less sure of.’

The pair were told to make changes before even considering surgery as there is no quick-fix solution.

“The problem has been swept aside for so long you don’t notice things. It’s only when someone says take a step back you realise they’re right,” confessed Sharon.

The family decided to make big changes to their lifestyle replacing fry ups and fatty snacks with vegetables and exercise.

In the next episode, we discover whether AJ will undergo surgery as they realise they need to be more independent and change their lifestyle.