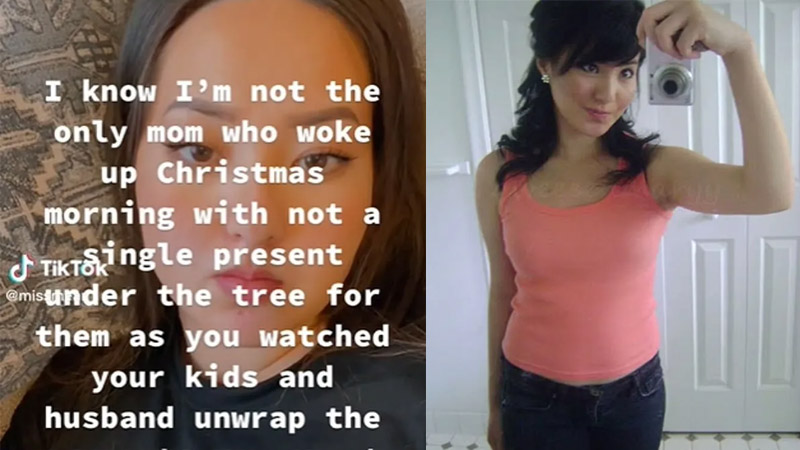 A mother’s statement about her lack of Christmas presents has angered internet users, who say even a note would have made a difference.

Christmas morning looks different in every household across the world, but many mothers have come together because they are frequently the ones putting in the most effort to ensure the rest of the family has the greatest day possible.

It’s not always the case, but several parents on TikTok found common ground after user @missmear said she didn’t have a “single present” to unwrap on Christmas Day.

The mother received dozens of comments after posting a video of herself on the sofa over the holiday season, with the caption: “I know I’m not the only mom who woke up Christmas morning with not a single present under the tree for them as you watched your kids and husband unwrap the presents you spent all month stressing over.”

In later videos, the TikToker, Mary, said that she’d bought and wrapped the gifts for her husband and two children after a difficult two years that included her losing both her mother and her unborn baby, as well as contracting coronavirus.

She was brought to the hospital just before Christmas 2021 and placed on a ventilator two weeks later, at which point she lost her baby.

“It was almost January when I woke up,” Mary informed her followers. “I was away for the whole holiday season. My children hadn’t seen me in two months. And everyone knows that moms usually make the magic happen.”

Mary claimed that she decided to spoil her children this Christmas to “make up for the fact that [she] was not there for them last Christmas,” but she was “upset” to see that not even her husband had made an effort to buy her a gift after everything they had been through.

In the comments, TikTok users rallied around Mary, with many sharing their own stories of being left without gifts and others saying that Mary deserved better.

“Thank you for writing this. “I felt less alone in the world,” one viewer observed, while another added, “This happened to me. It wasn’t so much that I didn’t get a present as no one realized I didn’t have one.”

A third person wrote: “Moms, too, need to be recognized. You deserved a present. Every mother does.”

Mary has expressed her thanks to those who replied to her video with warm remarks, and she has offered her support to those who are in similar situations over the festive season.