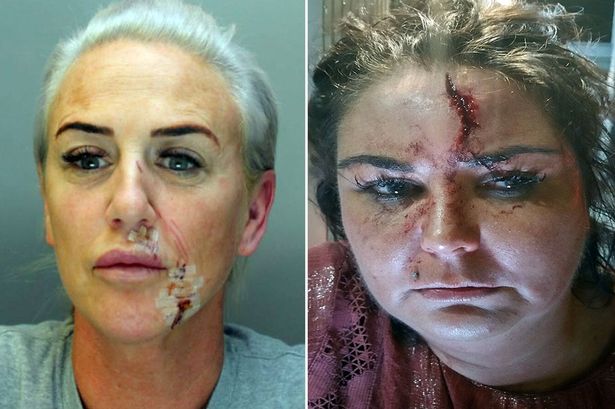 The single mums have been scarred for life after the shocking fight was gotten on CCTV film inside the drunk. At a certain point, one of the ladies tossed a glass into a crowd of innocent bystanders spectators

According to Daily Star “35 years old, Claire Byrne has attacked Paula Brennan with a wine bottle and CCTV  also captured the real incident.  Byrne followed Breen outside The Clock pub in Kirkdale, where she glassed her in the face, then back inside, hit her with a bottle after she fell to the floor, writes the Liverpool Echo.

As per source Breen along with his friend sitting in the Pub at 10.30 pm on January 10, 2020, Liverpool Crown Court heard. Prosecuting, Christopher Hopkins, said Byrne took a stool from that table and sat down at another with a different group.

Breen “clearly noticed” and walked over to speak to Byrne, who picked up a wine bottle and used it to strike her three to four times in the head, he told the court. Breen was left with a would to the side of her chin and cuts to her arms, and told police she “retaliated” when arrested.

Mr Hopkins said both women made admissions in police interviews and pleaded guilty to affray. Peter White, defending Byrne, St Alexander Close, Kirkdale, said “The CCTV does her no favours,” and accepted it was an “exceptionally serious offence.”

He said Byrne claimed she hadn’t been drunk but was on medication for mental health issues and knew she shouldn’t have been drinking. Rebecca Smith, defending Breen, of Craine Close, Anfield, said it was an “unprovoked attack” to start with.

Judge Woodhall said Byrne “initiated the violence” in a “sustained and unprovoked assault” and her violence was greater than Breen’s. But he added Breen hurling the glass into a crowd was the most serious violence.